A Suicide Prevention Coordinator and Psychologist at Nationwide Children’s Hospital in Columbus, who is also a father, is sharing some insight on how to have this tough, but necessary conversation with kids.

John Ackerman specializes in child and adolescent-clinical psychology. He also leads the behavioral health element of the hospital’s Center for Suicide and Prevention Research.

Ackerman quickly addressed a term often used that is not necessarily appropriate: ‘To Commit Suicide.’

“Because commit usually has to do with committing a crime or committing a sin,” he explained. “So, what we want people to understand is that depression and suicide usually have to do with an illness that is often treatable if we can detect it.”

He noted terms such as ‘died by suicide’ or ‘killed themselves’ are more accurate. “It’s objective. It has nothing to do with a person’s weakness or flaws. It is typically their solution to dealing with tremendous emotional pain.” He added, “They weren’t trying to die they were trying deal with unbearable emotional pain and they didn’t have the resources or the bridge to make it through that time.”

And Ackerman encouraged the community to understand building those bridges and providing those resources helps to ensure people can get through a crisis.

“Because if you can get through that crisis and understand the warning signs and help people navigate that initial risk period it’s much, much more likely that they’ll go on to live healthy and purposeful lives.”

Common misconceptions he pointed out included: ‘Once a person is suicidal they’re always suicidal,’ and ‘if they really want to kill themselves they will.’ “That’s not true,” said Ackerman.

This diagram from the American Foundation for Suicide Prevention outlines the common warning signs that someone may be considering suicide as an option. 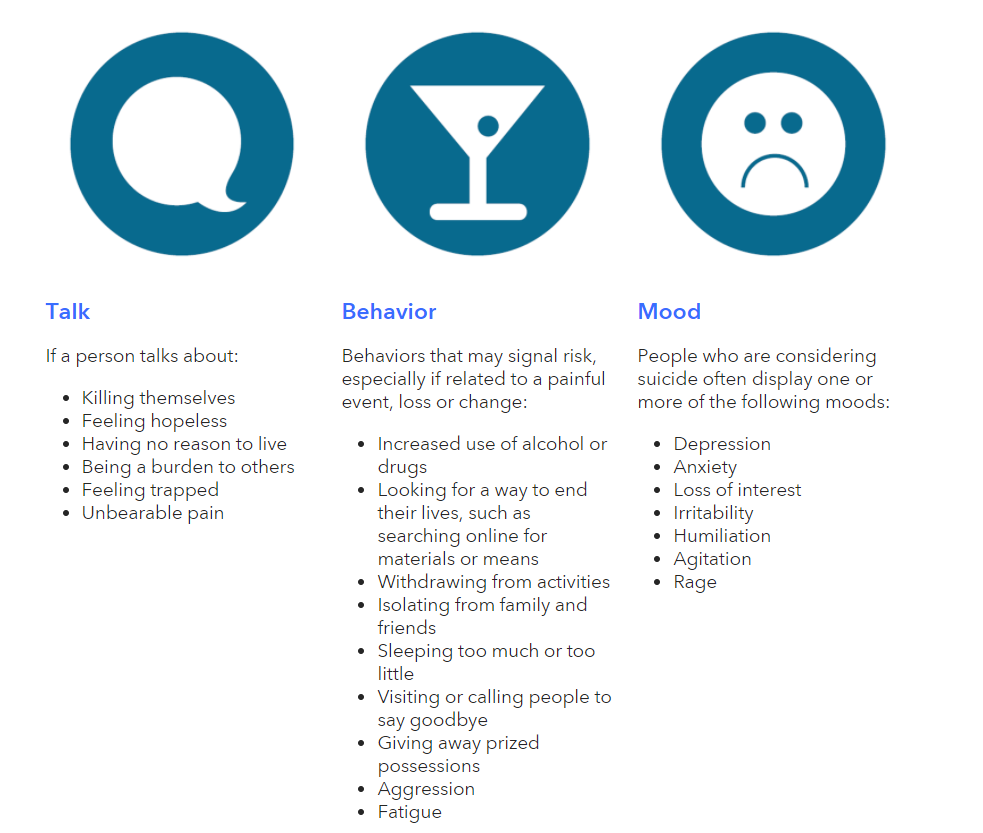 Another common ‘myth’ Ackerman discredited is that if a child is making suicidal posts on social media they must not really want to do it.

“Unfortunately, that’s not accurate. Folks who have ended up attempting suicide usually have talked about it,” he said.

A tragic scenario in the Perry Township community in Stark County, where a staggering number of young people have killed themselves, has been deemed a suicide contagion and Ackerman confirmed it’s very real.

“Celebrity and youth deaths contribute to contagion more than other stories,” he said.

Ackerman cited a recent study that focused on the number of suicides following the media coverage of Robin William’s death.

“It showed about a 10% increase in suicides in the months following [his] death and it happened more often among middle-aged males. And the way he died, more individuals died in that manner.”

Ackerman pointed to an acceptance that is created in this scenario.

“And in a way, there is also a blueprint,” he said. “Once you start to see that a person has taken their life and other people are reacting in a certain way and this person was able to escape pain, you start to break down those barriers [to killing yourself].”

The American Foundation for Suicide Prevention depicts the following statistics for all suicides nationwide: 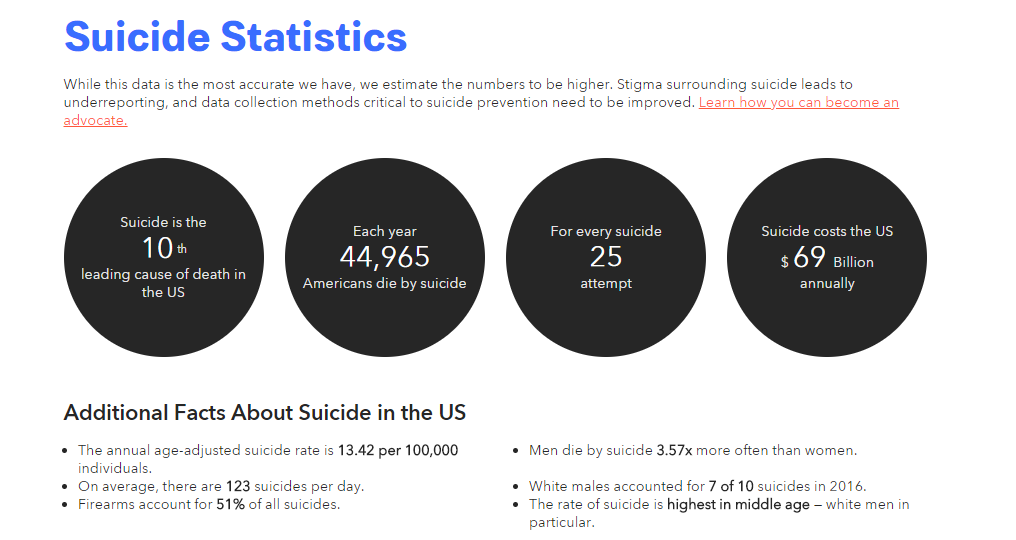 As for the ‘why’ Ackerman leaned on the effects of a concussion to try and explain when a community experiences a contagion.

“If you have one concussion you’re somewhat more prone to another. And so if you get this community and they’ve had suicide losses you’ve got a number of things at play that may increase vulnerability,” he said. “You’ve got these messages that the community is going to grieve and react and try to respond to this tragic event by paying a lot of attention to it; the method may be described in detailed or sensationalized ways and some vulnerable or hopeless youth may think ‘this could be an option.’ On top of that, you’ve got the trauma involved with young kids who have lost a friend or classmate, which can contribute to emotional distress.”

This flipbook (which is a clickable link) offers detailed information on how to talk with a child who has experienced suicide loss. 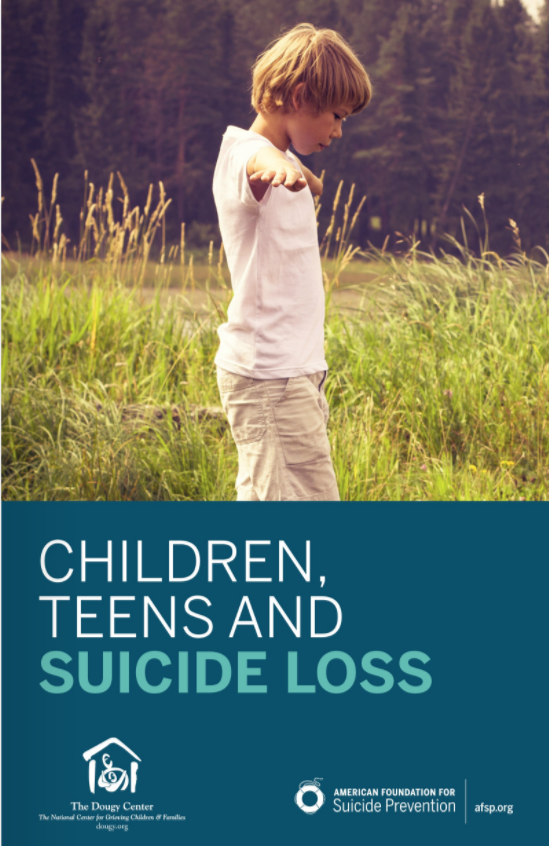 However; he admitted specific reasons that lead an individual to die by suicide vary from one person to the next.

“Those two suicides, or three or four or six, they didn’t stem from the same reasons,” noted Ackerman. “And I think trying to simplify things is what we want to do in the face of uncertainty and it’s really not helpful to do that in the case of a child dying by suicide.”

Ackerman noted that although difficult to pinpoint, statistics do show that there has been a noticeable increase in depression, anxiety and suicidal behaviors over the last couple of decades. “So, it doesn’t seem to be an artifact. Meaning it’s not just because we’re talking about it.”

He acknowledged that maybe we as parents and a society don’t do the best job of setting up our young people to deal with stress.

“I think we could do a better job at understanding that some emotional stress and some pain is good for people even at young ages and help them learn to be resilient,” he said. “And cope with the stress rather than removing distress.”

So, how should parents and guardians approach conversations about suicide with kids? Ackerman offered the following guidance: 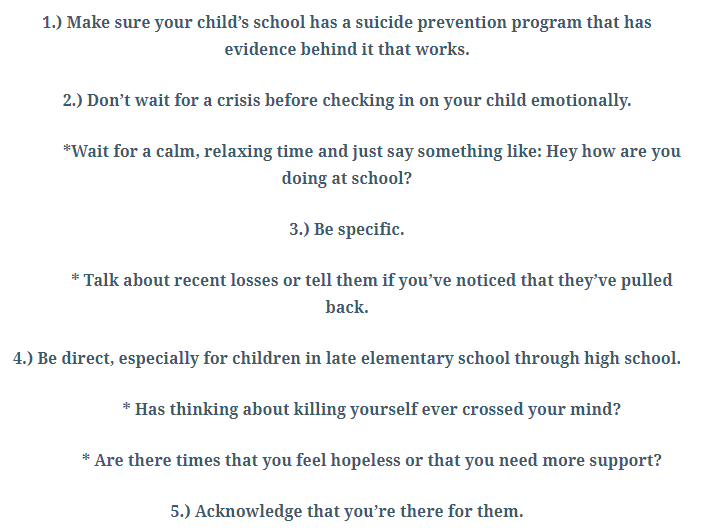 Ackerman stressed that by having the dialog, you are reducing the burden for the child.

“If they are feeling like they’ve wanted to die in the past, this is a game changer,” he said. “And, if they don’t think about it then they are very comfortable responding to that question with ‘no.’”

By having the conversation with your child, Ackerman explained you’ve opened the door, you’ve set the table and you allow your child to talk through it.

And what if your child DOES express interest in ending their life?

He added that kids already know about suicide. “You could let them learn about it online or with their friends or you could lead the conversation,” said Ackerman. “You could either talk about it or spin the roulette wheel.” 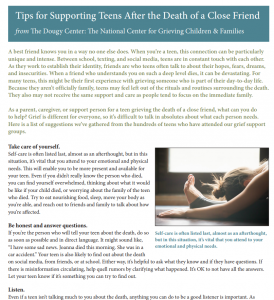 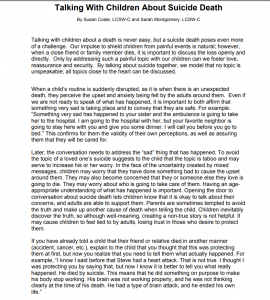 1 thought on “Talking to Your Kids about Suicide: Perspective from a Psychologist and Father”