A Claymont Intermediate student is recovering from broken bones in both wrists after an incident at school.

A GoFundMe Account has been established for the child where the publisher explains back on March 23rd   the student was pushed down the stairs at school. The family claims the child was sent to the nurse’s office where he was given bags of ice to reduce swelling and told he would be fine, but his mother was never notified.

The family alleges the child was taken to the E.R. following the end of the school day where they learned he had broken bones in both wrists. 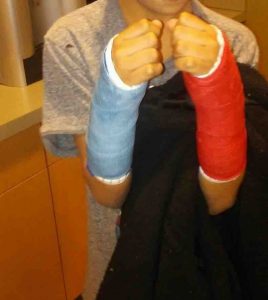 “The bullying in school is now unspeakable. We’re looking for possible round the clock care,” explained family members.

However, school administration argues the circumstances described by the family are inaccurate. Superintendent John Rocchi confirmed the child did suffer injuries after falling down the stairs at school back on March 23rd. However, he indicated, the family’s account as to how that happened is not factual.

“We investigated the incident fully and it was not an incident of bullying,” explained Superintendent Rocchi. He indicated the school has security cameras placed in several locations throughout the building and the footage of this incident has been reviewed.

Superintendent Rocchi went on to explain the term ‘bullying’ gets thrown around a lot.

“It has to be a repeated act over a period of time by a bully against a target,” he said. “Sometimes if kids are just being kids and push someone or say something mean to someone, that’s not necessarily bullying.”

He noted, however, that they do take every report very seriously. “An investigation is completed, reports are filled out and witnesses provide statements.”

Superintendent Rocchi added that the district is working closely with the mother. “This is an internal issue that needs to be dealt with between the parent and the school district.”

The GoFundMe Account has seen $80 donated towards the $3,000 goal to provide in-home care to the student until he’s able to return to school.

13 thoughts on “Conflicting Stories: Was it Bullying?”