Full disclosure: I don’t remember much about the last eight weeks. Tony and I have been bouncing around like ping pong balls in an angry spring tornado. In some ways, these last few months have been more trying for us than the months following Ashlie’s death.

It all started in August, when we noticed AJ was digging at his ears an awful lot. We took him to the pediatrician where he was diagnosed with a double ear infection. That one appointment has turned into mysteriously recurring infections and a rabbit hole of doctors’ appointments, specialists, medicines, two surgeries, a hospital stay, thousands of miles on our cars, tears, frustration, stress welts, anger and more meals out of the house than I want to admit. All of this while we kept the house semi-clean, planned a gala, worked a full-time job, ran a non-profit, rocked our businesses, ignored sleep to catch up and tried not to kill each other.

And we still don’t have an answer. So we aren’t done yet. 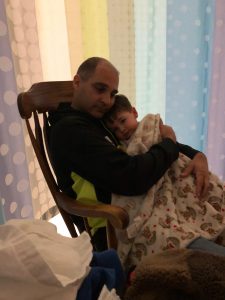 I know that people are going through worse. I totally get that. But when you take a Type A husband and wife who are naturally high achievers, high strung and high worry and add in something completely unplanned and beyond their control…it’s a mess. Let’s just say there were many moments we were not so kind to one another.

I let myself get caught in the chaos more than once. Even now, I can feel my blood pressure rising as I think of the last few months. But what if seasons like this serve a purpose? What if they’re meant for us to see what’s going right instead of what’s going wrong?

For example: for some crazy reason, we decided early on that AJ’s medical providers would be University Hospitals. …And they’re in Cleveland. So this whole time, we’ve been driving two hours round trip to almost every appointment and putting an obscene of miles on our cars in the process. Through my direct sales business, I’ve earned the use of a career car and have unlimited miles. I can use it to go anywhere, any time for any reason. And even thought it’s a lease, miles don’t matter. How many people get to say that?

Along the same lines, Tony and I both have incredibly flexible jobs. We can work almost anywhere at any time of day. Over these last few months, we’ve spent a ridiculous amount of time in the car and waiting at appointments. (You know how doctors are sometimes.) If we worked “normal” jobs, we’d have been fired weeks ago for the incredible amount of time we’ve spent away from work. But instead, September and October were my team’s best months in almost two years. And I worked half the number of hours I usually do. How many people get to say that?

And in times when the news tells us people are evil and everyone hates each other, it’s a lie. My personal tribe is amazing. As we drove up to AJ’s second surgery, one of his specialists called and said we’d have to stay overnight. We were completely caught off guard and completely unprepared…and scared. It was my birthday. Just three years prior, we’d spent my birthday in the hospital after Ashlie’s silent delivery. Some things just have bad juju.

I sent a text to a great friend and she called within seconds, covering us in prayer as we drove through the hospital entrance. She and her BSF friends prayed for us at the start of AJ’s 10:30 a.m. surgery and continued their vigil until I called her late that night. Others lifted their voices as well and sent encouraging texts and messages. I felt an instant sense of peace knowing they had our backs no matter what. How many people get to say that?

Then there’s Ashlie’s Embrace. Tony and I have the added blessing of founding a non-profit organization that is experiencing nationwide attention and growth. Our largest fundraiser of the year fell in October, right in the middle of the mess. I sent emails at traffic lights or while I brushed my teeth, squeezing in all the work I could when I could, fighting to play my part to make it a success.

But then our board members stepped up. They each had their own “life” happening: a wedding, a car wreck, moving, work and other personal things–but they caught us so we didn’t fall. They took tasks off our plates and added to theirs to get the job done. I was so proud to walk into that gala to celebrate the talents they gave us this year. We have the privilege of being surrounded by some pretty passionate people. How many people get to say that?

And of course there’s the part about how I know others have it worse. I know that what I described in the beginning is the long-term reality for many people. I’ve told Tony many times I’m so grateful that we aren’t dealing with something bigger and scarier…and you know what I mean. Our child is happy, energetic, full of life, healthy otherwise and amazing beyond measure. I know not everyone gets to say that.

I could go on and on about the ways we’ve been taken care of these last few months, but I think I’ve made my point. Am I frustrated? Yes. Have I wanted to say mean things at appointments? Yes. Am I done with seeing our sweet, innocent, adorable son being poked and prodded at every turn? You bet.

But really. What if we started seeing times of trial as times of triumph? To not be the victim but the victor, to find something…anything…for which we could be grateful? I’m working on it. And maybe you already do this. But will you join me? Let’s make every day Thanksgiving.