In this week’s Healthy Tip Tuesday, Trinity Hospital Twin City is preparing you for ticks! Prevention, removal, and symptoms to know!

According to the Centers for Disease Control and Prevention, tick exposure can occur year-round, but ticks are most active during warmer months (April-September). Know which ticks are most common in your area.

Before You Go Outdoors

After You Come Indoors

Check your clothing for ticks. Ticks may be carried into the house on clothing. Any ticks that are found should be removed. Tumble dry clothes in a dryer on high heat for 10 minutes to kill ticks on dry clothing after you come indoors. If the clothes are damp, additional time may be needed. If the clothes require washing first, hot water is recommended. Cold and medium temperature water will not kill ticks.

Examine gear and pets. Ticks can ride into the home on clothing and pets, then attach to a person later, so carefully examine pets, coats, and daypacks.

Shower soon after being outdoors. Showering within two hours of coming indoors has been shown to reduce your risk of getting Lyme disease and may be effective in reducing the risk of other tickborne diseases. Showering may help wash off unattached ticks and it is a good opportunity to do a tick check. 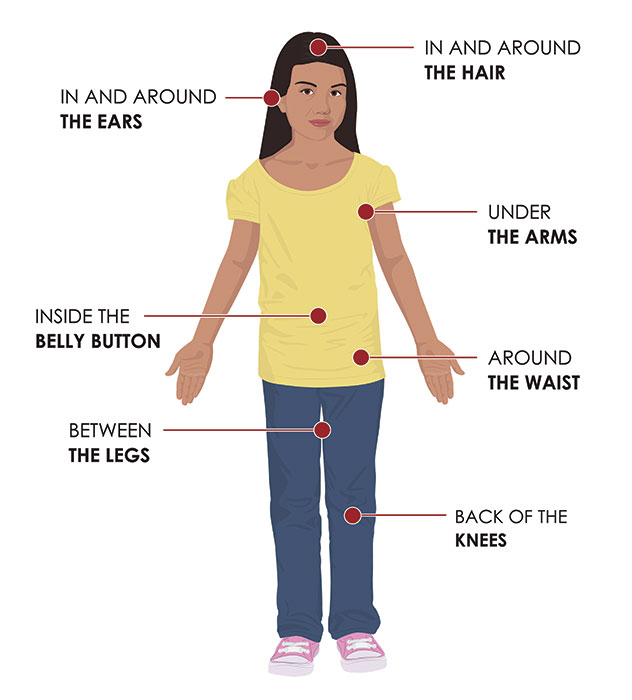 If you find a tick attached to your skin, there’s no need to panic—the key is to remove the tick as soon as possible. There are several tick removal devices on the market, but a plain set of fine-tipped tweezers work very well.

How to remove a tick

If you develop a rash or fever within several weeks of removing a tick, see your doctor. Be sure to tell the doctor about your recent tick bite, when the bite occurred, and where you most likely acquired the tick.

Many tickborne diseases can have similar signs and symptoms. If you have been bitten by a tick and develop the symptoms below within a few weeks, a health care provider should evaluate the following before deciding on a course of treatment:

The most common symptoms of tick-related illnesses are:

Tickborne diseases can result in mild symptoms treatable at home to severe infections requiring hospitalization. Although easily treated with antibiotics, these diseases can be difficult for physicians to diagnose. However, early recognition and treatment of the infection decreases the risk of serious complications. So see your doctor immediately if you have been bitten by a tick and experience any of the symptoms described here.