Skip to content
Three weeks ago today, my Dad was alive.
One of his doctors had requested a meeting with my mom, and she wanted me to attend. In the two weeks since he’d been admitted to the hospital, he was starting to decline.
When I arrived at the intensive care unit, Mom was waiting for me at the nurses’ station. We timidly followed one of my dad’s nurses to a room in the corner.
It’s one of those rooms where they tell you stuff you don’t want to hear, where difficult conversations are had and strategically placed boxes of cheap tissue lie waiting to catch your tears. 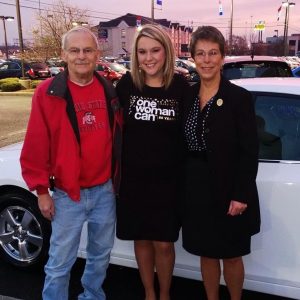 We met with the doctor and heard the stuff we didn’t want to hear. We used the cheap tissue and laughed when it stuck to my mom’s face.
After calling my brother, we wiped our eyes and took a deep breath. We made our way to dad’s room and stepped inside.
He was sitting up, more bright-eyed and alert than we’d seen him in days.
“Hey there!” he said, acknowledging our presence immediately.
“Hey Dad! When did you become a fan?” I said, gesturing to the TV, which was showing “The View.”
He chuckled and swore there’d been a car show on earlier.
Mom and I settled in on either side of him and talked, first to him, then to each other as he began closing his eyes and slipping in and out of sleep.
I don’t know how much time passed before I gently touched his hand and told him I had to go. I told him I loved him and gave him our secret sign. For years, we’d been leaving each other with a small gesture called “Secret Sign.” Known only to us, it was like an extra layer of “I love you.” He said he loved me too, and, unable to do our actual secret sign, he made one up. I knew what he meant.
It was our last conversation.
***
I was at a meeting on Thursday morning when I absentmindedly pulled out my phone. I had five missed calls: two from my mom and three from my husband.
Please, God. No.
I called Tony back first.
“Erin,” he said, his voice stilted. “You need to go. Your dad only has a few hours.”
I instantly began fumbling for my things, wasting precious seconds digging in my purse for the keys I never put in the same damn spot. 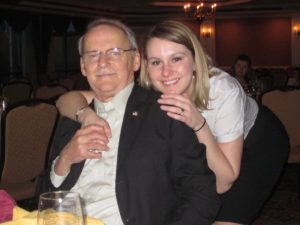 I rushed to pick up Tony and we headed to the hospital. When we arrived at 9:30 a.m., we crept into my dad’s room so as not to startle my mom, who was at his bedside, her back to the door. She turned around at our arrival, tears streaming down her beautiful, tired face.
Dad was propped up, some of the many tubes and wires he’d been connected to no longer attached. One of the difficult conversations we’d had with Dad’s doctor was that if there was nothing else they could do, they’d at least keep him comfortable.
He was always a pale guy (and the brunt of many jokes about being Casper), but his face had taken on a new color…a yellowish tinge I’d never seen before. His eyes were truly closed, instead of the half open-half closed thing he’d been doing the last few days.
I’d never watched anyone die. All I knew of death was the kick to the face of learning Ashlie had died, and there was nothing I could’ve done to prepare for that. But this was different, because I knew it was coming.
I don’t know which is worse.
My mind willed him to wake up–to squeeze my mom’s hand or chuckle at one of the stories I was telling him, because I’ve read that hearing is the last to go.
Not knowing if he had minutes or hours, I asked my mom and Tony for a moment alone.
I read him Psalm 23 and thanked him over and over for all the gifts he’d given me, some of which included gas money when Mom wasn’t looking, the love of good music and the importance of a firm handshake.
We watched the hours tick away as we waited for my brother Chris to arrive from Cincinnati.
He walked into the waiting area around 3 p.m. with Josh, one of his best childhood friends. Together, the five of us made our way back into Dad’s room, two-visitor rule be damned. 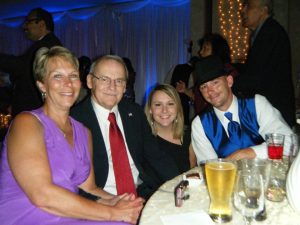 Chris and Josh shared stories of my dad and cars and all the advice he’d given them over the years. I propped my phone on my dad’s chest and we listened to Pandora on “Chicago Radio.” Chicago was one of his favorite musical groups.
I took my phone with me to go regroup. I didn’t turn the music on when I returned but went to Dad’s left side and held his hand. I didn’t know it yet, but it was time. It was 4:40 p.m.
As his breathing became even more shallow, I walked toward the window, overcome with anger and sadness. Why him? Why now? Why this way? Why was the world bustling just outside when my hero was taking his last breaths in here?
Dad opened his eyes for a moment. As he closed them, I walked back to his side, owing him the respect of being there for him every minute of his death as he was there for me every minute of my life. I stroked his shock of soft, wispy hair as I choked on my tears, asking him to give Ashlie a hug and hold her tight.
“Erin,” my brother gently said.
I looked up and he faintly shook his head.
Papa was home.
***
The doctor had told us that, once they made Dad comfortable, the burden of living would shift from him to us.
I get it now.
When we learned he may not make it out of the hospital, a friend had advised me to make sure I told him everything I wanted to say. What could I possibly have to tell him? There were no secrets in my family. I had no skeletons in my closet.
But as I laid with AJ the other night while he fell asleep, it hit me like lightning.
Papa, I should have told you I’m sorry. 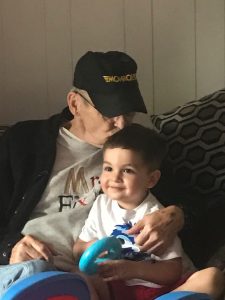 I’m sorry you didn’t get to see AJ before you died. He keeps saying, “Papa, hoptle?” because we told him you were in the hospital with an owie. He loves you so much.
I’m sorry I didn’t come to the hospital to see you sooner.
I’m sorry I hadn’t seen you in weeks before you went to the hospital because I was “too busy.”
I’m sorry for all for all of the days I could have made time to come over in recent years but didn’t.
As proud as you were of me for all of my accomplishments, they were the very thing that kept me from you.
I know you’d say it’s OK. But it’s not.
Without you and Mom’s strong foundation, I wouldn’t know how to work hard or appreciate my son, my husband and my home. I am who I am because of who you were. I picked Tony as my husband because of *your* example of how a man should treat a woman…because you approved of his handshake the day you two met.
Thank you for opening my eyes to the struggle of many daughters and sons…raising their own children, being successful and living life but not forgetting the parents that got them there. I promise to be there for Mom, and I promise to show AJ the paper bag trick and teach him as much as I can about cars, respect for the military and as many bad jokes as I can muster.
Thank you for the gifts you gave and the impression you made. Give Ashlie a kiss for us, and we’ll see you when we’re done down here.
I love you. Secret sign. 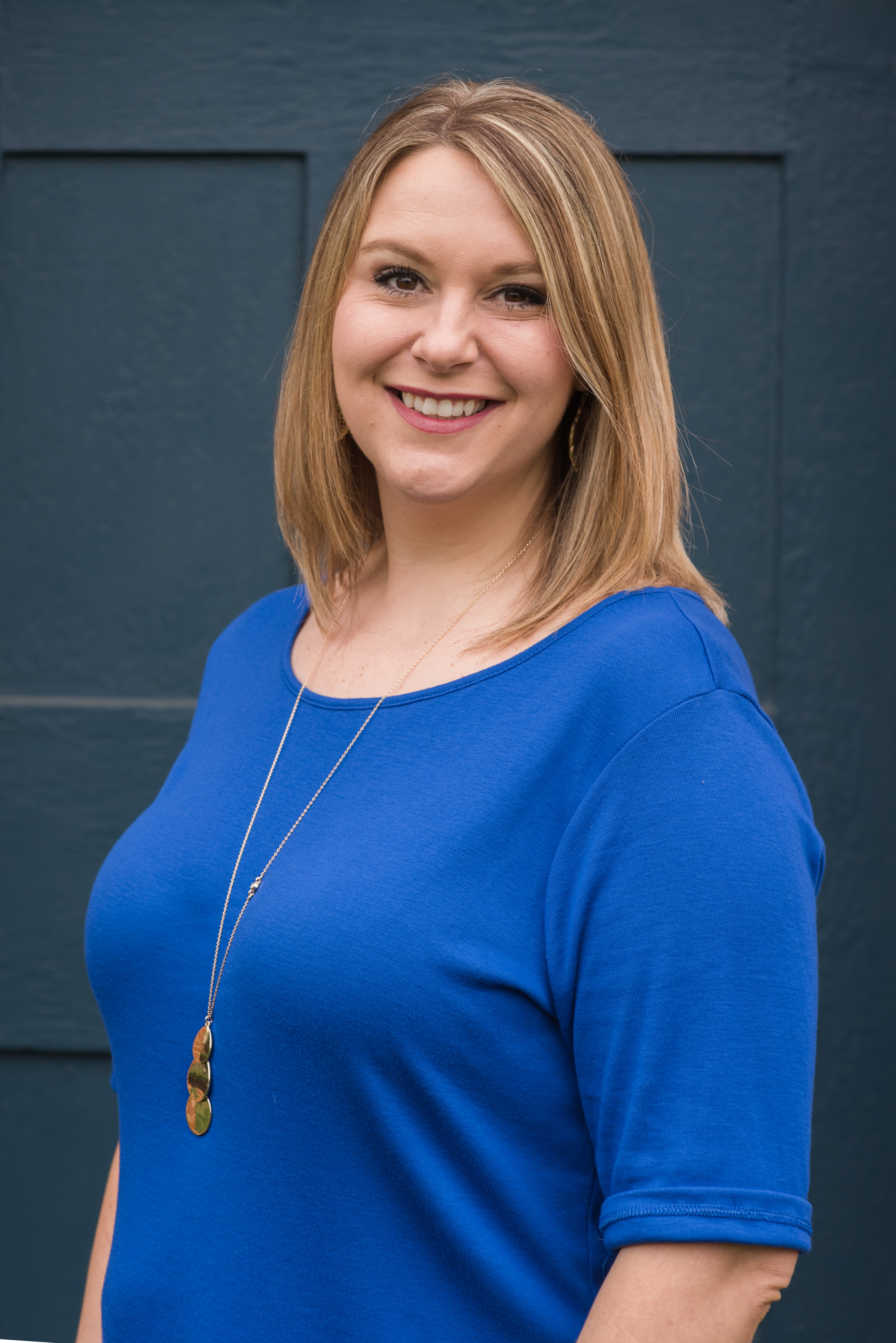