When I was in the first grade, my letter to Santa was published in the local newspaper. I still have the old clipping that reads, “Dear Santa, I know you’re real because my parents can’t afford the gifts you bring.” 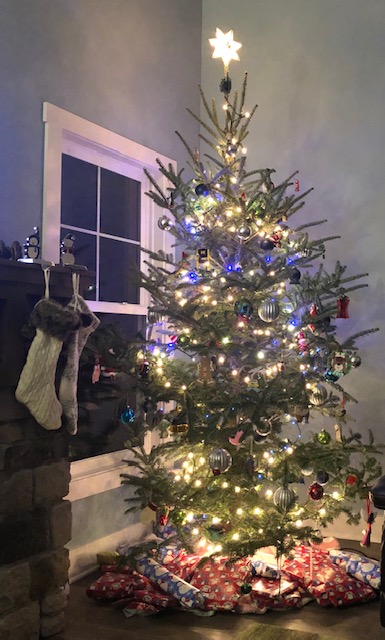 I can only imagine the stress the holidays brought for my young parents, struggling to pay bills and then buy gifts for their four young daughters who all emphatically believed the man from the North Pole would bring them their most coveted toys.

Despite my family’s financial hardships, my earliest Christmases were magical. I would wake my sisters up well before sunrise and we would sneak down the 100 year old stairs and peak into the playroom to find the gifts Santa had left under our still lit tree. Our eyes would scan the items under the tree to find the one “big” gift we knew Santa would bring us.

I’ll never forget the year my sisters and I all found Cabbage Patch Kids under the tree. I still have mine, in fact. Elise has red yarn hair that dyed part of her scalp the same hue. Her yellow flowered dress is faded now, but 30 plus years ago, that dress was just perfect and that doll was proof to me that Santa existed.

In addition to our “big” gifts, we always received practical items: new pjs, an outfit, socks, and maybe a small additional gift. We opened our stockings last, which were filled with a few small items, some candy, and always a new toothbrush. At the very bottom of the stocking sat an orange or tangerine, a luxury for us during the winter when fresh produce was expensive.

Christmas mornings were perfect and I was always perfectly content. We didn’t ask for a long list of gifts and didn’t expect them. The joy was condensed into that one “big” gift that no one else but Santa could have brought.

As I grew older, though, I became more aware of the very different Christmas experiences some of my classmates at St. Mary’s had. When we returned to school after break, all the children would compare notes about what they got for Christmas. My wealthier classmates’ lists seemed to go on forever. I don’t remember ever differentiating between which gifts were from parents and which were from Santa, but the present gap was glaring.

I’m sure I was a little jealous of my classmates’ Christmas haul, and I may have been a little self-conscious of my modest Christmas gift report, but I don’t remember ever feeling resentful or deprived. Still, this awareness of inequity highlighted by Christmas gifts under each family’s tree has become ingrained into my approach to Christmas.

Fast forward to Christmas 2019 where I am now Santa. This year may be the last when both of my children Believe. I want our first Christmas morning in our new home to be memorable and magical. I want the gifts under the tree to be something that only Santa could have brought. I have their Christmas lists and I want to check each and every item off of them. And therein lies my problem.

I’ve worked very hard at not raising materialistic children. It’s imperative that they are grateful for what they have and generous with those who have less. I hope they understand that more stuff doesn’t make us any more fulfilled and that more stuff means more damage to our already fragile planet. I want them to be mindful of the world around them and put their energy into being kind and helpful and magnanimus and respectful. I encourage them to make good choices and be responsible, not because of the promise of gifts, but because it’s the right thing to do.

I’m also hyper aware that my children will be going back to school after break and comparing notes with their classmates. Some of those kids may not have had much of a Christmas at all and others will be showing off their new iPhones and bragging about the 50 inch flatscreen TVs and PS4s now in their rooms. In the middle of this will be my children. I don’t want them to feel disappointed, but I also don’t want their gifts to cause another child to feel disappointed either.

Then there’s the issue of gift overload. We tend to want to make a show with mountains of gifts under the tree. It looks impressive, of course, but it’s all a big fat waste. When we overload our children with gifts, there is no time or attention span to actually appreciate anything. As soon as they open a gift, they barely have time to process before it’s on to the next one. In our efforts to create a special day for our children, we end up doing the exact opposite. Most of the items we smother our children with will end up gathering dust and eventually taking up space in an already overflowing landfill.

In fact, a quick search of parenting literature and websites shows that many parents have been debating the over-saturation of Christmas gifts. Parents are embracing more eco-friendly gift options and understanding that the instant gratification of cheap toys is not worth the long term environmental destruction.

Advice columns have provided guidance for teaching children gratitude during the holiday season including an approach called the four gift rule.Others have worried that the four gift rule takes the individuality out of gift giving and have suggested an alternative approach. Still others encourage more wealthy parents to be aware of the economic struggles less privileged parents face and avoid overloading children with expensive gifts from Santa. These are all wonderful pieces of advice and important perspectives to consider, but as with everything else connected to parenting, one size most definitely does not fit all.

While, yes they have their eyes on a few items, they honestly do not want much of anything. Because Pete and I have been mindful of not overdoing it on gifts, our kids haven’t come to expect mountains of presents. Because we implemented traditions like making empanadas with Grandma Hilda, going to the new Star Wars movie and lunch, and volunteering at the Salvation Army on Christmas Eve, my kiddos spend time looking forward to those experiences instead of adding items to their Christmas lists.

Last week, Lu burst into tears after we reminded her Woody the Elf was listening to her sassy retorts, but honestly I think she was more embarrassed of her actions than worried about how it would affect what Santa leaves under the tree. I’m so very proud of my children for their generosity, kindness, and empathy. Every day, they show me that they try to do the right thing and make good decisions, not because of the promise of gifts or the threat of coal, but because that is what good people do.

Instead of obsessing over buying them too much or too little, I should be looking forward to the two weeks of time I get to spend with my babies while Christmas is still magical. I am almost finished shopping and the kids are going to have a wonderful Christmas. This is not because we overdid it on gifts, but because our kids didn’t even come close to overdoing it on their lists. That’s not where their focus is and it shouldn’t be mine.

I just bought our tickets for Star Wars and can’t wait for the Christmas morning strata and empanadas the kids will help me make. Most of the kids’ gifts will be from Mom and Dad, but I think we’ve found the perfect gifts that could only be from Santa and…they will also find toothbrushes in their stockings.  That is a conundrum for my children to ponder later.

Get FREE access to our quarterly E-Magazines & promos from the Newsymom Deal Page.