At the school board meeting on Monday, following more than an hour-long closed-door session, the board unanimously voted to approve resignation agreements with teachers Darcie Apple, Brittany O’Hara and Rochelle Seibert, Nurse Juli Grove and Guidance Counselor Lauren Castello. All had been on paid administrative leave since October 4th as an investigation was being conducted by the law firm Pepple & Waggoner in Independence, Ohio.

The board explained in a statement back on October 6th that the investigation was launched after they were notified of complaints about a group of teachers exchanging inappropriate text messages during the school day.

Officials have not elaborated on the details surrounding the messages but noted the district has a policy that prohibits staff from using wireless devices for certain ‘unacceptable uses’ during the school day or during a school-sponsored event. 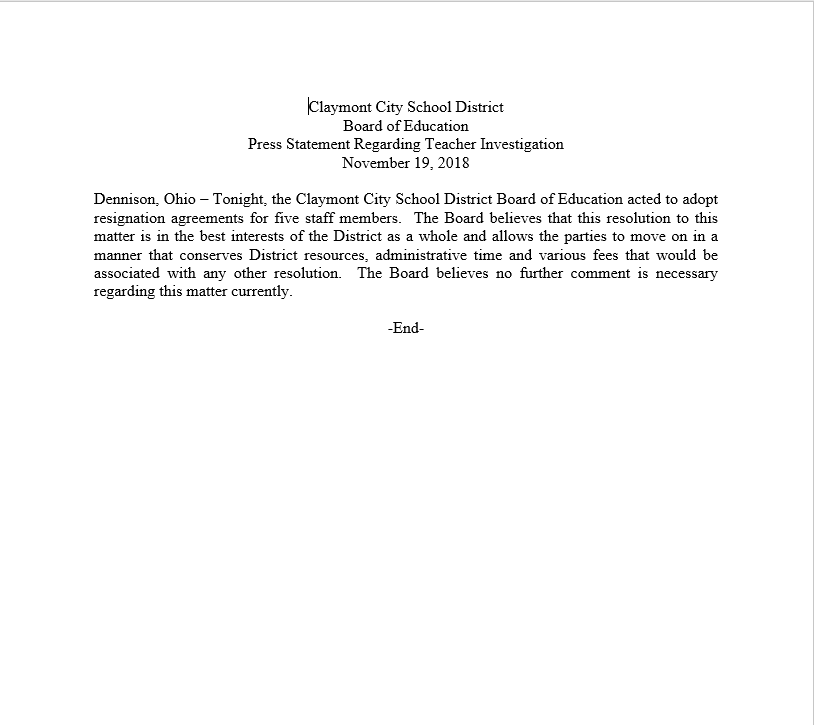 On October 8th, teacher Derek O’Hara was placed on leave as officials began investigating him as well. He returned to work on Monday.

Following the board meeting on Monday, board president Michelle Sproul explained the board believed the decision to accept the resignations is a resolution to the matter and that the district plans to move forward.  Officials have said no further comment on the situation is necessary at this time.

However; reports indicate an additional statement will be released regarding why Derek O’Hara was the only staff member permitted to work.