During Red Ribbon Week, red ribbons and the color red symbolize the commitment to raising awareness of the killing and destruction caused by drugs in America. Students meeting with the Commissioners feel passionate about the initiative and have been working to spotlight Red Ribbon in their schools and communities. The proclamation will ask Tuscarawas County citizens to support and participate in drug prevention education activities, making a visible statement that they are strongly committed to a drug-free state.

The resolution expected to be approved by commissioners next week states there were 63,632 recorded overdose deaths in the United States in 2016. Across Ohio, unintentional drug overdoses caused the deaths of 4,050 residents in 2016 and in Tuscarawas County 169 people died at the hand of a drug overdose in 2017. 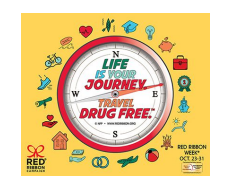