Union Hospital and Ashlie’s Embrace organization are announcing the placement of the first CuddleCot™ in Tuscarawas County. 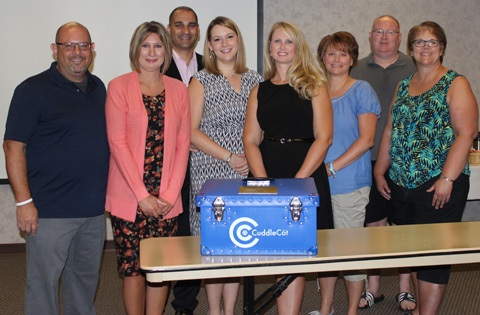 CuddleCots™ consist of a cooling unit and gel pads that lay in a bassinet or Moses basket and keep a baby cool after stillbirth or infant loss. The cool temperatures slow some of the natural changes that occur after death, which gives parents and families more time to say goodbye.

The device is manufactured and used extensively in the United Kingdom, yet there are fewer than 500 of them in U.S. hospitals.

“We hope this CuddleCot™ will be a blessing to the parents faced with the shock of losing a child,” said Erin Maroon, Ashlie’s Embrace co-founder. “We are honored to partner with Sweet Pea Angels to further their mission of supporting bereaved parents.”

Ashlie’s Embrace, a registered 501(c)3 organization, was founded in 2016 by Erin and Anthony Maroon of North Canton after the loss of their full-term daughter, Ashlie.

The Maroons had very little time to say goodbye to their first child, and, still in shock, gave her back to hospital staff after holding her for less than an hour. Upon returning home to an empty nursery, Erin read about the CuddleCot™ device. She said she knew immediately that she and her husband needed to start an organization to place them in more hospitals.

Ashlie’s Embrace provides comfort to grieving parents after stillbirth or early infant loss by increasing awareness of CuddleCots™ and making them available to parents through medical facilities.

The Sweet Pea Angels is a group of bereaved parents in the Tuscarawas County region that provides compassionate support to each other in their grief following the loss of their child through miscarriage, stillbirth, prematurity or early infant death.