The journey to safer schools continues for a 10-year-old middle schooler from Uhrichsville. 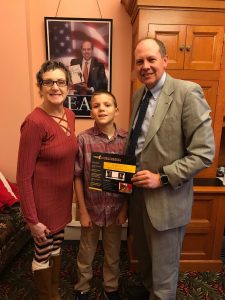 Kohlton Calvey and his mother Elaine Zurcher have been actively fundraising and campaigning to place a specific safety device in classrooms. Kohlton has chosen to support the Barracuda devices, which consist of a long steel bar with a flap at each end. The bar is placed under the door, two pins are secured and the door cannot be opened.

He explained in an exclusive interview with Newsymom.com that he feels so passionately about the issue because “there are a bunch of school shootings all over.”

On Wednesday, his journey took him to Columbus where he met with Senator Jay Hottinger. According to Elaine, Kohlton was able to talk with Senator Hottinger for a half hour. He shared that he’s raised $2,000 and recently presented a check to the inventor of the Barracudas, Troy Lowe with Silverback Safety and Training Solutions. Kolton has secured 14 Barracudas for his school, Claymont Intermediate, but he’s now turning his attention to placing the devices in other schools as well.

“He told Kohlton what a great thing he’s doing and that he’s a true leader,” added Elaine. Kohlton also hand delivered 320 letters written by his classmates.

“I think as a mom, if you can take your child there you should. I learned a few things,” said Elaine. “And the excitement and look on Kohlton’s face as we walked through the Capital building was priceless.”

Kohlton and Elaine will be featured in an upcoming Newsymom.com YouTube series where we’ll discuss school safety and local efforts to enhance it.