And the inductees are…

The Paper Airplane, Wiffle Ball, and Clue today became the latest inductees to The Strong’s National Toy Hall of Fame. 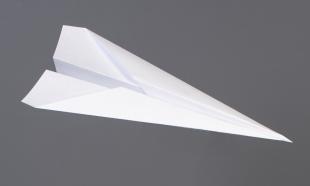 About paper airplane: Artist and inventor Leonardo DaVinci sketched and designed flying creations using parchment in the 15th century. Later, in the early 19th century, Sir George Cayley identified four primary forces—lift, drag, weight, and thrust—which eventually helped the Wright Brothers first take flight in 1903. These defining moments helped lead to the purported invention of the paper airplane in 1909—but its exact origin is unclear. Experts can agree that the principles that make an airplane fly are the same that govern paper versions. Paper’s high strength and density make it similar, scale wise, to the materials out of which actual airplanes are constructed.

“Where some toys require financial investment, paper airplanes start with a simple sheet of paper, coupled with creativity and dexterity, to produce a toy with infinite aeronautical possibilities,” explained Christopher Bensch, The Strong’s vice president for collections. “They allow the imagination to takeoff and soar!” 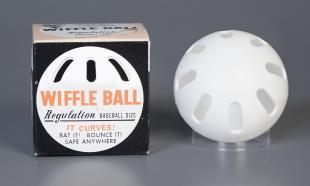 About Wiffle Ball: A retired semi-pro baseball player in 1950s suburban Connecticut noticed that his son and friend could not play a game of baseball in the cramped space of their backyard (especially without breaking any windows). He began cutting holes in spherical plastic containers and gave them to his son for testing, eventually developing a ball with eight oblong slots that allowed the ball to grab air, thus diverting its trajectory. With it, a pitcher could easily throw a curve, a slider, or a knuckle ball. The Wiffle Ball slowed the game, shrunk the playing field, and made it conducive to post World War II-suburbia. The family-owned Wiffle Ball Inc. opened in Connecticut and established rules for the game of Wiffle Ball. Soon, it was producing millions of Wiffle Balls each year and it continues to do so.

“The Wiffle Ball changed the outdoor play landscape, taking the basics of backyard baseball and transforming it into something easier for neighborhood kids to negotiate. In the more than 60 years since its introduction, generations of Little League, high school, college, and pro sluggers have begun their baseball careers swinging at a Wiffle Ball,” noted Curator Michelle Parnett-Dwyer. 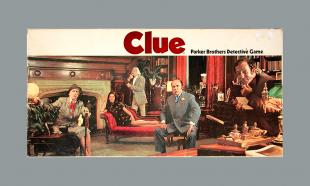 About Clue: A British couple designed Clue during World War II and based it on the murder-mystery dinner parties popular around that time. They patented the game in 1944 and successfully pitched it to Waddington Games, but material shortages kept it out of production for several years. Then, in 1949, Waddingtons released it under the name “Cluedo.” Gaming giant Parker Brothers purchased the rights and released it in America under the name “Clue” shortly thereafter. The game—in which players must deduce with available evidence the murderer of the luckless Mr. Boddy—became a quick success. It remains one of the top 10 best-selling games of
all time.

Curator Nicolas Ricketts added, “Millions of Clue games are sold each year—including a junior version, as well as travel, advanced, collectors, and themed editions. Clue has also had its own movie, been featured in numerous television and books, and remains an icon of pop culture.”