(Canton, Ohio) – The CDC is now releasing the survey results collected from more than 15,000 students, most in Stark County schools, during the 2017-2018 school year.

The survey was administered to students in 7th – 12th grades following the suicides of 12 students between August of 2017 and March of 2018. CDC officials note this is more than seven times the national rate and 11 times the rate in Stark County between 2011 and 2016.  Questions in the survey asked about connectedness, social media, mental health, life experiences, friendships, suicidal ideation, suicide attempts, and resiliency.

Key findings from the survey published in the 56-page report released on Monday, October 15th include:

John Aller, Executive Director of Stark County Mental Health & Addiction Recovery (StarkMHAR), notes he believes this information is a bridge between the young people facing these issues and the adults seeking solutions. “We know that getting the youth themselves involved in prevention activities increases our chances for success,” he says. “We want to help erase stigma by using what we now know to encourage frank conversations between young people and all the folks who are here to help them.”

The full report can be found here: 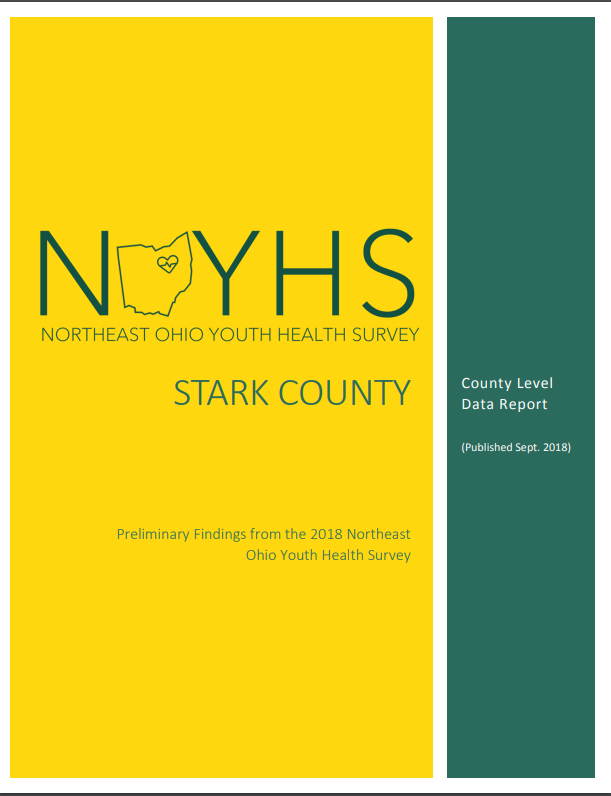 Resources available for parents and community members to utilize include:

Suicide Prevention
Evidence-Based Prevention – Search tool from Suicide Prevention Resource Center to help partners make decisions about the programs and practices that will be a part of a comprehensive approach to suicide prevention.
http://www.sprc.org/keys-success/evidence-based-prevention

Preventing Suicide: A Toolkit for High Schools
Toolkit helps high schools, school districts, and their partners design and implement strategies to prevent suicide and promote behavioral health among their students. It describes the steps necessary to implement all the components of a comprehensive school-based suicide prevention program and contains numerous tools to help carry out the steps.
http://store.samhsa.gov/product/Preventing-Suicide-A-Toolkit-for-High-Schools/SMA12-
4669?WT

The Trevor Project
The Trevor Project is a national organization with a focus on crisis and suicide prevention among lesbian, gay, bisexual, transgender, and questioning (LGBTQ) youth. It provides a toll-free crisis phone line, an online social networking community for LGBTQ youth and their friends and allies, educational programs for schools, and advocacy initiatives.
http://www.thetrevorproject.org

Crisis Planning
Practical Information on Crisis Planning
Guide for schools and communities to navigate crisis planning. Provides an overview of critical concepts and components of crisis planning with examples of promising practices.
https://rems.ed.gov/docs/PracticalInformationonCrisisPlanning.pdf
Crisis Text Line
Crisis Text Line provides free emotional support and information to teens in any type of crisis, including feeling suicidal. Individuals can text with a trained specialist 24 hours a day. Text
“HOME” to 741741.
http://www.crisistextline.org/

Postvention Guidelines
Practical guide from Australia, designed to assist schools in responding to the tragic occurrence of suicide or attempted suicide within their student community. Includes actionable items and suggested timeline for schools in the process of responding to a suicide.
https://www.education.sa.gov.au/doc/suicide-postvention-guidelines

Postvention Manual
Guide for schools and communities to develop their own postvention procedures.
https://www.starcenter.pitt.edu/Files/PDF/Manuals/Postvention.pdf

Children, Teens, and Suicide Loss
Plain language guide for parents & families on how to support youth through loss of a loved one to suicide.
https://afsp.org/find-support/ive-lost-someone/resources-loss-survivors/children-teens-suicideloss/

Jason Foundation Parent Resource Program
Website containing basic information about suicide and how families can help prevent youth suicide. It also has a video of a parent and community seminar that includes basic information on suicide and provides awareness and suicide prevention strategies for parents and other adults.
http://jasonfoundation.com/get-involved/parent/parent-resource-program/

Society for the Prevention of Teen Suicide
Website’s parent section provides information to help families talk with teens about suicide or the death of a friend by suicide. It includes a link to the video Not My Kid:

Social Media
Tips on Social Media from Riverside Trauma Center
Numerous resources from Riverside Trauma Center, including talking to children about 13 Reasons Why; responding to a traumatic event; and tips on social media after a suicide loss for students, school administrators, and parents.
http://riversidetraumacenter.org/trauma-center-resources/

How to Use Social Media for Suicide Prevention
Resource from California Mental Health Services Authority to help organizations or communities evaluate if use of social media for suicide prevention is right for them, and if so, tips for how to implement safe, effective messages into organizations’ social messaging.
http://eiconline.org/teamup/wp-content/files/13-CALM-0106-Socialmedia_Guide_FNL.pdf

Suicide Clusters and Contagion
Journal article from Principal Leadership providing an overview of the concept of suicide contagion, factors driving suicide contagion, and how school leadership may prevent or disrupt contagion.
http://cdpsdocs.state.co.us/safeschools/Resources/Suicide