Mariah Carter has been nominated as an AMAZING mom! 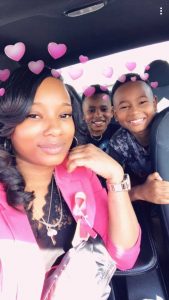 “I first met Devon and Ja’von Merriweather at basketball practice.  I called the team in for a final breakdown after practice and, as usual, most of them took one final shot, goofed around with their teammates, and took their time walking over, all of them except for Devon and Ja’von. The two boys were seated on their balls and looking up at me attentively, waiting for their coach’s final marching orders. I looked down at them, impressed by the respect they were showing me and jokingly remarked, “You tell your mother that she is doing a great job with you two.” They smiled and nodded, and over the next few months, I would realize just how much of an understatement that was.

Mariah Carter is raising two incredible boys under circumstances that would crush the toughest of spirits. The boys’ father died tragically a few years ago and they are all still feeling the angst of that loss. Through the haze of grief, though, Mariah has managed to move forward, understanding the magnitude of her role in her children’s lives. She is a nursing school student and works as an STNA while still managing to juggle the practice and game schedules of her athletically gifted sons. Over the last few months, I’ve watched Mariah gracefully endure family struggles, migraines, Devon’s broken hand, her aunt’s death, and Ja’von’s emergency appendectomy. Still, she remains focused and resolute.

Mariah’s priorities have become crystal clear as I have gotten to know her and her boys. Education is essential and her sons’ strong academic performances are evidence of that. Devon and Ja’von are also a testament to the moral character she instills in them. Her boys are polite, considerate, and know to stand up for what is right. Ja’von sticks up for my Lucy when her brother picks on her. The brothers always bring their plates to the sink and never forget their pleases and thank yous. When they stayed overnight at my house, my jaw dropped when I walked into the room to find all of their blankets neatly folded in a pile on the couch! They always check in with their mama and repeat her words of wisdom, speaking them with reverence and warmth. As I spend time with her boys, these small moments build a larger picture of the men Mariah is raising her sons to be. 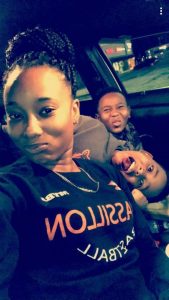 Her boys aren’t perfect, and after an incident at a basketball game, I accidentally witnessed Mariah’s calm, but stern disciplinary approach. I was impressed by her ability to keep her own emotions in check while explaining in no uncertain terms that their behavior was not acceptable. An undercurrent of love ran through her words, reaching her sons’ ears with meaning beyond a superficial lecture.

The bond between Mariah and her boys is a powerful one that was strengthened through the tremendous loss they endure together. Mariah has taken the challenge of single motherhood on with a force that is driven by wisdom beyond her years and loving determination to overcome each obstacle as it arises. She even finds time to send words of encouragement to friends like me when she senses we are struggling; this kindness extends through her children who are an absolute joy. She is truly an exceptional mother whose resilience, strength, and love deserve to be celebrated.” -Nicole