One evening last week, Bolivar Police Sgt. Chad Hilty made his way to Dairy Queen in Bolivar to grab a fast dinner before continuing his shift.

A routine stop for a bite to eat turned into a moment that reminded him there is hope for society.

While waiting to satisfy his hunger and eagerness to hit the road, Sgt. Hilty noticed a young boy clinging to his father but remaining fixated on him.

What Sgt. Hilty was not aware of at this moment, was that 6-year-old Maddox Strawn was in line to use his $10 gift card he’d gotten for his birthday for a blizzard. But, he’d leaned over and whispered to his dad, “Do you think he likes ice cream?” 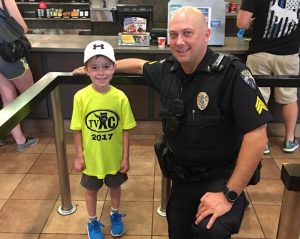 The young boy wanted to use his birthday money to buy the officer ice cream instead.

Despite being unaware of the conversation between Maddox and his dad, Stephen, Officer Hilty sensed the boy was a little nervous to approach him.

“So, I wanted to do something to win him over,” explained Sgt. Hilty.

He went out to his cruiser and signaled for Maddox and his dad to come to. And, out came the stickers and Maddox got to look at the cruiser and just like that, they became friends.

Stephen told Newsymom.com, “I asked Maddox if he would like a picture with the officer and he said yes! He thanked him for the sticker and waved bye as we left, almost like they were best friends,”

Sgt. Hilty explained that to him, the encounter represented even more.

“It seems like every law enforcement officer is put in one group when they hear one bad thing and it goes all across the media and the kids see that just as everyone else does,” said Hilty. “We’re more of a ‘thing’ than an actual, normal human being.”

Sgt Hilty said, however; this seemingly simple interaction with Maddox, reminded him that the next generation can make a difference.

“They’re our future so we need to interact with them them as well.”

But, Sgt. Hilty also recognized who is responsible for teaching children to again look up to law enforcement rather than fear them.

He explained he often cringes when he comes across parents who say things to their kids such as, ‘there’s a police officer. You better behave or he’ll take you away.’

“That bothers me so bad. That kind of causes the kids to fear us and we want them to come to us no matter what is going on.”

Sgt. Hilty noted the refreshing difference in the way it appears Maddox’s (and Savannah, and Zoey) parents, Stephen and Kristina Strawn, are raising their children.

“The biggest influence in a child’s life is their parents. So just a big thank you to [them],” he explained.

And in his roughly 16 years in law enforcement, he explained the encounter with Maddox was one of a kind.

“I’ve never had a child offer to buy me ice cream, so that was nice.”

2 thoughts on “Child Give Officer ‘Hope’ With Kind Gesture”