(Uhrichsville, Ohio) – Allegations against a group of teachers within the Claymont City School District continue to make their way across the community.

Earlier this month the school district issued a press release to confirm district employees had been relieved “of their duties with pay pending the outcome of an investigation into conduct violation of Board Policy.”

Officials add in that press release that “the action was necessary to facilitate a swift and thorough investigation into complaints that came to the Board that the teachers have engaged in a pattern of exchanging inappropriate text messages during the school day.”

Board members have met on multiple occasions in special sessions to discuss the matter.

On Tuesday, October 24th the school district announced a school board meeting for that same day via Facebook to address the allegations: 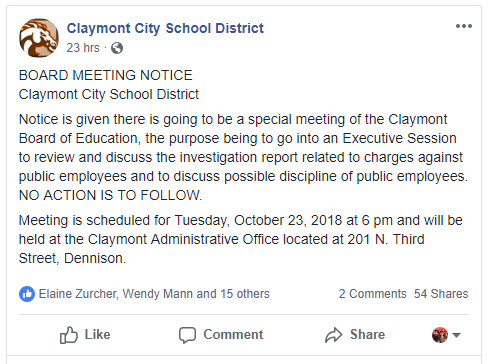 The community continues to express concern via social media as a post has gone viral allegedly indicating comments made by the accused group of staff members. Allegations in this post have not been proven accurate, but highlight extremely offensive comments and even threats made against students, parents and fellow staff members.

In a call to the Claymont City School district, our news team was notified that Superintendent Scott Golec, has recused himself from the situation. Recusal often occurs when an official has a conflict of interest in a specific situation. We spoke with district Treasurer, Kim Beckley who is handling communication-related to the ongoing investigation. “The investigation is still ongoing,” she said. “We plan to issue another press release when there is more information.”

Additionally, the Newsymom team has left a message with Donna Andrew, the attorney with the law firm of Pepple & Waggoner in Cleveland who is reportedly representing the Claymont City School Board.

We have made an effort to reach the school employees facing these accusations so to offer an opportunity for them to share their side of the story. We have not been in direct contact with any of them.