In New Philadelphia, school officials, first responders and city leaders are working side-by-side to improve safety and security at schools.

Officials note that this annual meeting, which was started last year, took on a different tone in light of the recent incident at the high school which resulted in what the administration refers to as a ‘soft lockdown’ with various law enforcement agencies involved.

Officials say the overwhelming feeling was that there was tremendous cooperation between all first responders involved and the situation was controlled in a safe and orderly manner. “The take away was that the drills that we complete with the schools for safety worked.” said New Philadelphia Police Chief Mike Goodwin. “The training that takes place at all the schools assisted in the procedures that were implemented. There was assistance from other agencies that did not hesitate to do whatever was necessary to keep those that were in the buildings safe and secure throughout the incident. At that point in time there was not a safer place to be.”

In a press release issued by the school district officials go on to say that school safety plans are consistently reviewed and staff is trained annually and drills are conducted monthly during the school year to ensure adherence to the plans.

“The bottom line is that the kids were safe and it could not have been achieved without the great effort of all law enforcement that was on site that day and the staff that assisted in any way possible. Leadership could not be more pleased with how the command team operated during the incident.” said Travis Alberts.

Other discussions during the meeting surrounded current school safety topics and how everyone can work together to provide additional training to staff for better preparedness in the future. 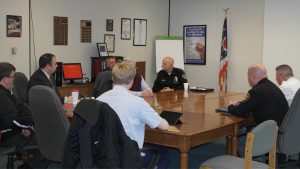 Officials have confirmed that they will be working on initiatives moving forward such as increased staff training, and working on communicating effectively and efficiently, internally and externally during an incident. Additionally, they say they will be looking at forming a community task force who, along with experts in the field of safety, can talk through ways to continuously improve the safety of students in our schools.

“The safety and security of our students, staff, and community are always our top priority. I can assure you that the district has taken multiple steps over the past several years to enhance our safety and security measures.” said Superintendent David Brand. “We know that no plan is perfect, but trust that we are committed to improving upon it every day. We understand and hear the concerns.”

Anyone with questions or concerns is asked to contact Dave Brand or Travis Alberts at 330- 364-0600.