(Canton, Ohio) – Fueled by a passion for teaching, Brooke Herbert sold her living room couch to make sure her kindergarten students would have plenty of learning opportunities.

In that first year of teaching kindergarten and her second full year as a teacher at Beacon Academy in Canton, the $400 she earned bought her a $100 bargain couch and left her $300 to spend on puzzles, games, and other learning toys for her classroom.

“My top priority during this pandemic has been to create an environment that will allow my students to stay healthy and get an education in person compared to virtually at home,” Herbert explained. “With no allowance for teachers, it all comes out of pocket or through donations with the right resources. I learned how to hustle and make things work because my mother did the same as a single mom to get us by.”

This year, however, she can keep her furniture and still have an outstanding classroom for her students. The 2015 graduate of Kent State University at Tuscarawas was selected as one of two nationwide winners in the second annual Wayfair Professional’s Dream Classroom Giveaway.

A panel of employees at Wayfair, an online furniture and home goods store, chose Herbert and a fourth-grade teacher from Connecticut as the winners from more than 1,100 submissions. Winners were chosen based on the positive influence on students, their class, the community, or by their unique approach to teaching. 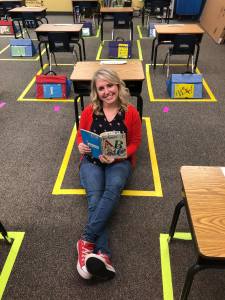 Herbert indicated, she actually thought the contest was spam. “I actually did not know about the contest until I got an email from Wayfair. I thought it was spam,” she said. I got ahold of my principal who was also tagged and she said she had signed me up and to reply.”

Beacon Academy Principal Karla Robinson had nominated Herbert for the giveaway opportunity after hearing talk about selling her couch. Herbert was commended by the Wayfair pannel for her commitment to ensuring her students had engaging learning opportunities amid the ongoing COVID-19 pandemic that was ultimately and abruptly closing schools and businesses to slow the spread of the virus. Herbert had been dedicating her time to making meaningful connections with her students through daily phone calls and video chats and also some front-step home visits. She worked closely with families to help them get all of the supplies and devices they need to ensure her students could adequately and effectively continue their learning.

“The families I communicate with teach me more than they realize. Whether it be their child lost their first tooth, or they are struggling at home, we come up with ways that would be most beneficial for the child and us,” she said. “This is called a win-win. I don’t have children, so whatever is going on in their lives, I take [it] as a learning experience. I consider my students my kids, but at the end of the day they go home, so ultimately I’m like an Aunt!”

“When I got the news that I won a contest and would be getting things for my classroom I was still in shock and wasn’t really going to believe it until I further spoke with the company,” Herbert noted. “It was too good to be true hearing they were going to donate thousands of dollars to my classroom in products!” 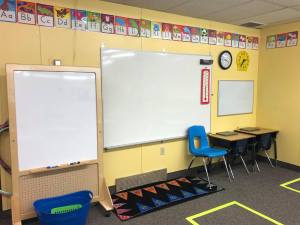 At first, Wayfair offered Herbert new desks and chairs. “But I already had that taken care of! So, I politely asked if there was an alternative seeing as how I already had this and due to COVID my class could use other things that would help keep my environment organized, exciting, and engaging. Wayfair gave me a list of suppliers that would donate to me. I just needed to send them a list for approval,” Herbert said.

With that, Herbert chose a bulletin board, a whiteboard, a 2-sided dry erase/magnetic board on wheels,  a filing cabinet, soft seating for 20 with book storage, storage for the soft seats, and a hanging wall of cubbies for 20 students. Herbert noted that before the cubbies, her kindergarten students had to stay in their own areas, keep their supplies and learning materials organized at their desks, along with keeping their water bottles from spilling and backpacks/jackets hung on their chairs. “Most have never had preschool, so when they came to me, a school setting was unfamiliar to them,” she explained. “Being expected to contain all their belongings in their designated taped off areas was and wearing masks correctly was a challenge.”

The cubbies, she noted, have added a personal touch and a way to set them up for success with the least amount of distractions for their learning. Additionally, Herbert indicated the soft seats give the kids a place to relax behind their desks and stretch out in a more comfortable setting.

Herbert indicated she is excited to have so many resources and supplies to give her students the best learning experience possible. She noted, she now has her dream classroom.