Work continues to bring a facility to Canton that is specifically designed to offer resources, activities, and services to children with Down syndrome. 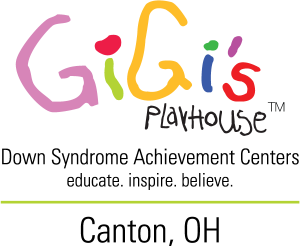 Stacy Jackson, who has a Masters Degree in Special Education, is also a mother of six boys, four who are adopted, and an 18-month-old daughter named Malia. She explained she learned Malia had Down syndrome when she was 12 weeks pregnant.

“It didn’t take too long to kind of overcome the shock, probably due to my background in Special Ed, but also I think just because we adopted because we had such a hard time getting pregnant,” she said.

Malia was in the PICU at Akron Children’s Hospital for about four months due to respiratory issues and she still currently has her trach and feeding tube. “Last March is when I first heard about GiGi’s Playhouse coming to Canton,” she added.

Sara Heckert’s background and experience with the special needs community goes back to her own childhood.

Her aunt was born with Down syndrome and she noted her family was very involved in the development of the disability community in Stark County through the 50s, 60s, and 70s. Her brother also has Autism, which she said further propelled her into the disability community. “It pre-dates me even. It’s in my blood per say, literally,” explained Heckert.

Because of her background, Heckert explained she always wanted to work with the disability community and so she received an undergraduate degree in Special Ed. 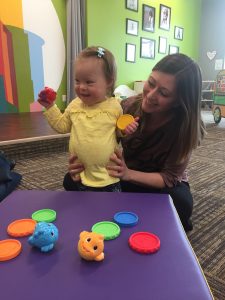 From there, Heckert pursued adoption with the specific interest in a child with Down syndrome and that pursuit blessed her with Ava. “Later I saw on Facebook that there was a GiGi’s Playhouse coming to Canton and I knew right away that I wanted to be involved,” she noted.

GiGi’s national headquarters is in a suburb of Chicago and according to the organization’s website, GiGi’s Playhouse is a Down syndrome achievement center designed to educate, inspire and believe in all people with Down syndrome.

The mission is: ‘To change the way the world views Down syndrome through national campaigns, educational programs and by empowering individuals with Down syndrome and their families in the community.’

GiGi’s Playhouse offers free therapeutic and educational programs for individuals with Down syndrome and their families. There is no waiting list or financial criteria that must be met. 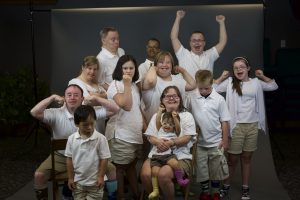 Heckert noted, “The playhouses are designed to serve those from the prenatal diagnosis all the way to the adult population.”

Heckert and Jackson note that while specific programs at the various locations of GiGi’s Playhouse may vary, the overall goals include creating networking opportunities, providing educational tools, motivating participants, offering therapeutic and educational opportunities, and removing the cost barrier.

Jackson said a GiGi’s Playhouse would also help break the barrier of misinformation and public judgment.

“I’m starting to see where society and our community, unfortunately, are going to put a lot of restrictions and limits on my daughter,” she said. “And having a place like GiGi’s where we can be together with other families and my daughter can be with other people similar to her, is just huge for me,” she said.

That same passion fuels Heckert’s drive to see this through as well. She recognized that she and Jackson had more knowledge and experience with the disability community before becoming a part of it personally.

Because of that understanding, an element they hope to bring to GiGi’s Playhouse in Canton would be new diagnosis baskets that offer resources, information, books, GiGi’s swag, pictures, fun activities and more.

Organizers working to bring GiGi’s Playhouse to Canton note they believe it will be in the city, but they have not yet started searching for a facility.

“That will kind of depend on where the funding is coming from,” added Heckert.

Some of the criteria for establishing a GiGi’s Playhouse in a community include having a storefront location, handicap accessibility, and to have an inviting appearance and design. 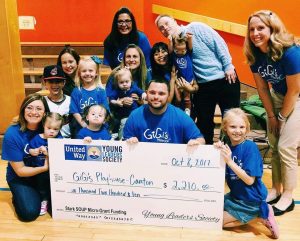 Fundraising continues with a ‘Ladies Night Out’ event on Friday, February 23rd at La Pizzaria on Dressler Road NW in Canton. The comedy event will begin at 6:00 p.m. and will feature Akron native, Tyron Hoisten.

Ticket information can be found by visiting GiGisPlayhouse.com/Canton.

Jackson noted that while funding is the biggest hurdle, phase one which focuses on fundraising, is nearly complete and phases to follow are expected to happen quickly.

They hope to open GiGi’s Playhouse in Canton on World Down Syndrome Day, March 21st, 2019.