A Canton Police Office is among the community leaders that will host an event designed to bring hope and remind kids they are never alone. 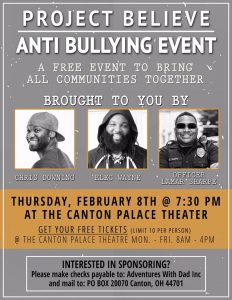 Officer Sharpe explained this event comes amid what’s been deemed a Suicide Contagion among young people in Stark County.

“It’s just devastating,” he said. “I’m seeing what these kids are going through and they just feel like there is no hope for tomorrow, but there is hope for tomorrow. It’s a temporary problem and [they] are trying to fix it with a permanent solution.”

Investigators have indicated they do not believe bullying is a direct cause of six current or past Perry Local School students taking their own lives this school year. Nearby communities have also lost young people since the ‘Suicide Contagion’ was announced.

Officer Sharpe noted, however; spreading the anti-bullying message never hurts. He added that the situation affects him not only as a police officer but as a parent. “I see such hurt in the parents’ face, and I’m like what can we do to fix this. If you know that somebody is having issues, having a problem, step up and fix it before it’s too late.”

He recognized that there are a number of avenues community leaders need to consider when trying to do just that. Specifically, he explained parents need to create an environment that allows their children to talk to them about anything.

“Our kids need to feel comfortable coming to their parents and parents need to be able to have listening ears,” he said. “If they feel like you’re not going to listen, they’re not going to talk to you.”

Additionally, he noted a need for more resources available specifically to children in the community as well as opportunities that allow parent and children to seek help and advice together.

One method is to continue to spread awareness and promote the anti-bullying message, which is what Officer Sharpe will be doing as part of Project Believe this Thursday.

He explained his personal experience gives him the direct understanding of the obstacles kids may face among their peers.

“There was a moment in time where I went through a lot because we didn’t have a lot. I had three shirts and two pairs of pants and they weren’t none of the name brand clothes either,” explained Officer Sharpe. “So, I got picked on a lot. I would go over to my cousins’ house and I’d be seeing them in nice clothes and I’d say, hey let me where that. And, I’d try to slide out of their house at the weekend and maybe take it home so I could have something nice to wear on Monday.”

Part of Officer Sharpe’s story recognizes moments like that he faced throughout his childhood, but also notes the amazing experiences he had playing football and making it to the minor-league all because he pushed through those obstacles and refused to give up.

“I was ready to give up and I was through, and I’m so glad I didn’t,” he said. “That’s why I look at these kids and say there’s a brighter tomorrow. Don’t worry about the problems today. Yea, it’s going to hurt but guess what, it’s going to build you into something even better.”

The goal of the event on Thursday he explained, is really to bring all communities together. “We can be so divided. Whether it’s male or female or black or white and it’s enough of all that because when you look inside all of us we’re all the same.”

The event is designed not to mourn, but rather to celebrate life and lift all of those in attendance higher.

As for his overall message, “Don’t give up and reach out to people. Feel open and feel free to talk to somebody. And, don’t be afraid to receive help.”