U.S. Senator of Ohio continues his push to ensure more than 200,000 Ohio children continue to be insured. 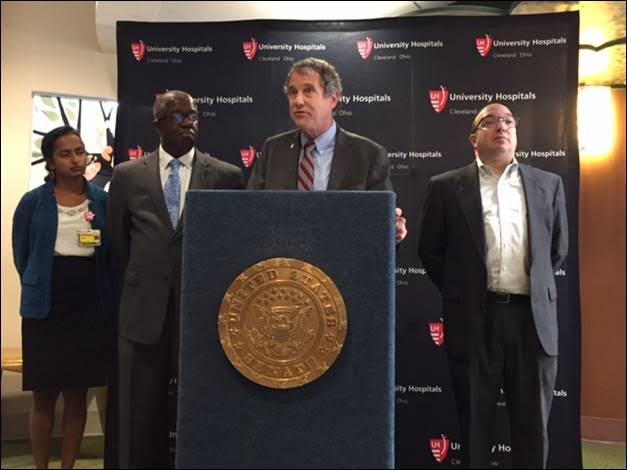 This week U.S. Sen. Sherrod Brown (D-OH) joined a northeast Ohio parent and Dr. Edward Barksdale, Chief of Pediatric Surgery at University Hospitals Rainbow Babies and Children’s Hospital, to call on Congress to reinvest in the Children’s Health Insurance Program (CHIP), known as Healthy Start in Ohio, as funding is set to expire at the end of this month.

Brown is a member of the Senate Finance Committee, which has jurisdiction over CHIP. According to officials with Senator Brown’s office:

“Because of CHIP, 209,000 Ohio children have access to quality, affordable health care today – health care they may not have received otherwise,” said Brown. “CHIP has always been a bipartisan effort, and regardless of how you feel about other aspects of our health care system, making sure all of our kids have access to the best possible care is something we should all be able to work together on.”

CHIP, which was created in 1997, is a joint state-federal health insurance program for low to moderate income children and pregnant women who are not Medicaid eligible.

Within three years of its initial passage, all 50 states opted into the program, providing millions with access to health insurance. Nationwide, CHIP provides access to comprehensive, affordable coverage to more than eight million children and Healthy Start helps cover more than 209,000 Ohioans.

While the Healthy Start program in Ohio is funded until the end of the year, extending funding for CHIP is important to provide certainty to states that the program will continue and to families that their children will continue to be covered under the health insurance program.

Brown was joined by Josh Botnick, a northeast Ohio parent whose children were covered under CHIP when he was laid off from his job.

“The ability to take health insurance out of the equation, feeling confident that my family will continue to get the same quality of care they had while I was working, was a huge weight lifted. On behalf of Northeast Ohio parents, I for one am grateful that the CHIP program exists, and I thank Senator Brown for leading the charge to extend its funding,” said Botnick.

Officials add that Brown led efforts in the Senate to protect CHIP and Healthy Ohio and the vital coverage they provide children and pregnant women nationwide. The Medicare Access and CHIP Reauthorization Act of 2015 extended funding for CHIP for two years, through September of 2017.

Earlier this year, Brown secured a commitment from Center for Medicare and Medicaid Services Administrator Seema Verma and Health and Human Services Secretary Tom Price to work with Brown on extending CHIP.

Brown was the lead sponsor of the Protecting and Retaining Our Children’s Health Insurance Program (PRO-CHIP) Act of 2015 in the Senate, which would have extended the program through 2019.