The Performing Arts Center at Kent State University at Tuscarawas is bringing an Emmy Award-winning comedienne and one of the most beloved television personalities to New Philadelphia. 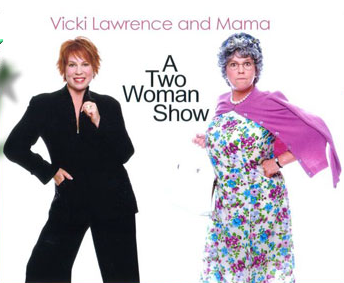 Vicki Lawrence was plucked out of total obscurity as a high school senior. She went on to become part of the now-legendary cast of the ‘Carol Burnett Show.’ “I went to the Harvard School of Comedy in front of America,” said Lawrence of her Burnett Show training.

The unprecedented ratings for the ‘Carol Burnett Showstopper Special,’ which delighted more than 50 million viewers, convinced Lawrence that the time is right to take Mama out of the closet, dust off her sensible shoes and hit the road with her new touring production, Vicki Lawrence and Mama: A Two-Woman Show.

Lawrence will take the PAC stage first. “My new show will not be a retrospective,” she explained. “The show is a mixture of stand-up comedy, music and my observations about real life.”

The multi-talented entertainer is mostly known for her acting and comedic talents, but she also earned a gold record for the 1973 hit, “The Night the Lights Went Out in Georgia.”

“I think people will get a kick out of the things Mama has an opinion about. We’re creating new material with a more modern and cutting edge. Where Mama is concerned, expect the unexpected. There’s really nothing she can’t do,” she said.

“I hope people will be pleasantly surprised by a side of Vicki they may never have seen…I know thy will be looking forward to Mama, and for her part, that crazy old gal will be up to the challenge.”

Her stop at the PAC in New Philadelphia comes as part of her 40th Anniversary tour, which includes just two stops in Ohio.