Signs point to yes! After being named a finalist seven times, the mystical Magic 8 Ball has been inducted into the National Toy Hall of Fame, alongside the popular card game Uno and the fast-paced, resurgent pinball. The honorees were chosen from a field of 12 finalists that also included American Girl Dolls, chalk, Chutes and Ladders, Fisher-Price Corn Popper, Masters of the Universe, sled, tic-tac-toe, Tickle Me Elmo, and Tudor Electric Football. 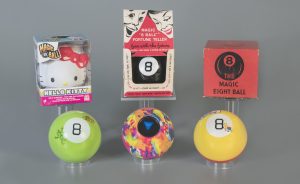 About Magic 8 Ball: Introduced in 1946, the Magic 8 Ball allows users to flirt harmlessly with fortune-telling. Users pose questions, shake the ball, and then read one of 20 answers that float to the surface at the bottom of the ball—ranging from “ask again later” and “signs point to yes,” to simply, “no.” The toy became an icon of popular culture, making its first television appearance on the Dick Van Dyke Show in the 1960s, and showing up later on hit series such as Friends and The Simpsons.

Says Curator Michelle Parnett-Dwyer, “Millions of people have purchased a Magic 8 Ball in the last seven decades, and its wide appeal and quirky nature have helped it maintain popularity. According to some surveys, it’s one of the top 20 most popular toys of the 20th-century. The ‘Outlook is Good’ for Magic 8 Ball!” 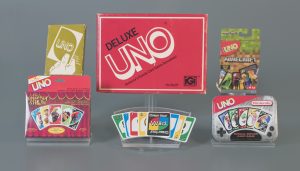 About Uno: An Ohio barbershop owner named Merle Robbins dreamed up Uno while playing cards with his family. The new game—a shedding game like crazy eights, where players seek to empty their hand—proved to be simple enough for young children and varied enough for adults to enjoy. Robbins and his family produced 5,000 decks of Uno and pitched it across the United States before a manufacturer bought the rights to it. The game, now owned by Mattel, has inspired countless versions, including Elvis, Disney, and Hello Kitty varieties.

Says Curator Nicolas Ricketts, “Uno continues to be a top-selling game, and it owes its success to its variability of play, fast pacing, and its wide age appeal. When it comes to family-friendly fun, it’s hard to beat Uno.” 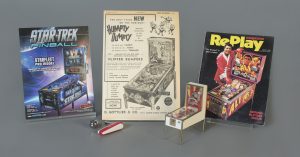 About pinball: Pinball traces its roots to the 18th-century French table game called bagatelle. Modern, coin-operated pinball machines originated in 1931, and manufacturers added new features over the next two decades. Flippers transitioned the game from one of chance (and maligned by some as a form of gambling) to a game of skill. Over the last century, pinball has incorporated top brands (such as Star Wars, Indiana Jones, and Game of Thrones) and become common in bars, amusement parks, arcades, restaurants, family fun centers, and other public places.

Chief Curator Christopher Bensch says, “Pinball has been enjoying a renewed interest as a new generation of digital natives discovers the fast-paced, kinetic gameplay that’s easy to learn but tough to master. Pinball has also taken on new life in mobile-friendly versions.”