“I actually found my tumor on my own. I rolled over in the night and woke up just enough to feel something wasn’t right. I felt around a little but tried to tell myself it was probably nothing and go back to sleep and I’d check in the morning.”

But, it wasn’t nothing. It was something…and something that would change her life forever.

A few weeks after stumbling upon a bump in the middle of the night Ashley was conducting a self-check in the shower when she located what quickly became known as ‘Loretta,’ her tumor.

“I do regular self-checks anyway because of my family history of breast cancer. I first heard the word ‘Cancer’ from my doctor on June 23rd, 2020.” 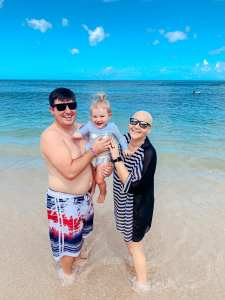 Life was about to change drastically for the Tuscarawas County native who now resides thousands of miles away in Hawaii with her husband, who serves in the military, and their daughter. Ashley began her first round of chemo just a couple of weeks later. She learned her cancer is what doctors call ‘triple-negative,’ meaning it is very aggressive so it was critical that treatment began right away. “From the second I received my official diagnosis, Stage 2a Triple Negative Invasive Ductal Carcinoma, and treatment plan I have made lists and countdowns and kept myself busy. It’s been how I’ve coped. Don’t get me wrong, I cried, a lot, in the beginning and I was so angry that this was happening to me but I decided very quickly I wasn’t going to let that consume my life and thoughts.”

Ashley and her husband, Jeff, decided to essentially mourn the life they once had and had planned on having, recognizing, that even after Ashley beats the illness, things will always be different. They allowed themselves time, but then Ashley made a decision to always find the joys in life. “I was going to find the joy in every twist, turn, and bad day, because there is joy in it all if you look hard enough. I realized quickly that cancer chose the right person when it chose me. Sounds weird, I know, but hear me out. I’m the right person because not only am I going to beat the crap out of Loretta (her tumor) but I’ve got an amazing support system that stretches not only states but countries between our family, friends, and military family.”

Ashley recognized that someone else may not be as fortunate to have a support system like she has. “And if I’ve learned anything so far, it’s that you can’t do this alone,” she added. “You know when you put on a coat you haven’t worn in a while or a pair of pants, and you find money in the pocket? That internal victory dance you do like you won the lottery even though it’s only $10? That’s what it’s like for me every time I get a text, card, or message from one of my amazing #walkerthruit tribe. “They always seem to know when I need it most.” And one of the things Ashley has appreciated the most so far from her family is that they continue to make her feel like so much more than a cancer patient. 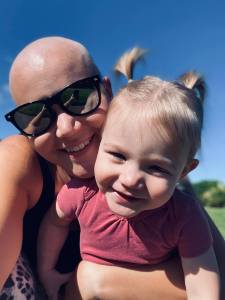 Not only is she battling the illness, but she is also striving to be the best wife and mother she can be. “Mom guilt has been the hardest part of this for me, and it’s broken my heart more times than I can count,” she explained. ‘When mommy can’t play or pick her up or is gone for hours and hours it kills me. And, of course, the question that scares me more than anything is what if I pass this horrible thing on to her?” But, once again reverting to her unwavering strength and determination to stay positive, Ashley reminds herself that she’s doing this all for her daughter. She’s fighting for her.

“It’s what we all do as moms. Whatever we have to, for them.”

Some argue that monumental life lessons can be discovered in any tragedy and it seems as though Ashley Walker is a believer indicating she has learned so many things so far along her journey. She noted all of the medical things she wished she didn’t know, a lot of the different types of cancers, and that every person’s cancer is different.

“But, one thing I’ve learned that I would share, especially for the moms out there…take the dang picture. Even when your hair is a mess, you think you look horrible, or whatever the excuse is, take the picture.”

And for the photos, she’s been taking Ashley said this when thinking of her daughter, “I hope that she can look back at all the pictures of this time and see that hair, eyebrows, and eyelashes don’t make someone beautiful. I hope that she sees strength is more than just muscle. And I hope that she sees how much she was loved, not just by me, but by our family and friends, some of whom she’s never met.”

In closing, while in the midst of a new beginning for Ashley and her family, she explained why she’s chosen to be so open about her story. 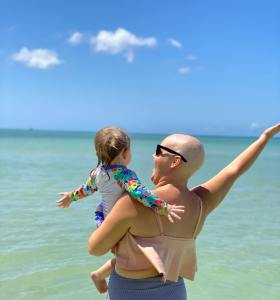 “I need my journey to mean something. And if that means just one person remembers to schedule a mammogram or do a self-check that could save their life, then it’s worth it.”

Ashley continues to be open throughout her journey and is inviting anyone who wants to join her to do so. You can continue to follow Ashley’s story by following her Facebook page.

Ashley, we’re all rooting for you and we are believers that you CAN BEAT THIS!