Rachel Kinsey has been nominated as an AMAZING mom! 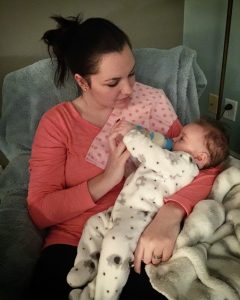 “My whole life I’ve wanted to be a mom and after my miscarriage I was officially diagnosed with endometriosis and polycystic ovary syndrome (PCOS). Me even being able to get pregnant that first time was a fluke for lack of a better term. And I under went surgery for my endometriosis, and was officially diagnosed as infertile after 2 years of monitoring and not having ovulated during that time at all. I went through multiple specialists, doctors, hormone Therapies, procedures, and fertility medications for three years. By trying to have my own child I put my body through so much and it took a huge toll on my confidence and how I saw myself. I would go through cycles of losing my hair, I gained over 50 lb (in one year), I’ve been poked, prodded, and had vials after vials of blood taken for testing. I tried very hard for a long time to get my body in perfect shape to not only get pregnant but stay pregnant long enough to have a healthy baby. Finally on February 22nd, 2017 I got the very faintest red line on a test, and my heart swelled! (Shout out to Dr. Randolph and Clomid) I was monitored closely throughout my pregnancy and though I had two or three slight complications I did very well for being as high-risk as I was. Ultimately I was emergency induced at 37 weeks due to possible cholestasis of pregnancy. She was delivered early but when the test came back I did not have cholestasis, which was good. However, when she was born the cord was wrapped so tightly around her neck and her abdomen that she didn’t start breathing right away. My delivering doctor let my husband and I know that there were three possible outcomes for her birth and two of them ended in her death. Had I had cholestasis and continued my pregnancy she would have been poisoned by the bile salts in my blood, and had I not been emergency induced, she would have continued growing she would have been strangled by the cord because of how tight it was already. I’m lucky and blessed to be her mother and I feel so honored to be able to call her mine. Being a mom is a dream come true. ❤️🧡💛💚💙💜“

Send entries to contributor@newsymom.com or by commenting on our contest post pinned to the top of our Facebook page.