You’ve probably heard of second-hand smoke, but are you aware of the added dangers of third-hand smoke?

Erica Mesler, Community Outreach Coordinator, and a Certified Respiratory Therapist at Trinity Hospital Twin City explains that while the public is generally familiar with the term ‘second-hand smoke,’ they may not realize the significant health risks it can cause for our kids.

By inhaling second-hand smoke, children can experience a number of added health concerns. It affects the immune system causing them to get sick more often; creates more lung infections like bronchitis and pneumonia; causes them to cough and wheeze or have shortness of breath; increases the risk for more ear infections; can trigger asthma attacks, make asthma worse, or even cause new cases of asthma in children who didn’t have any symptoms before. 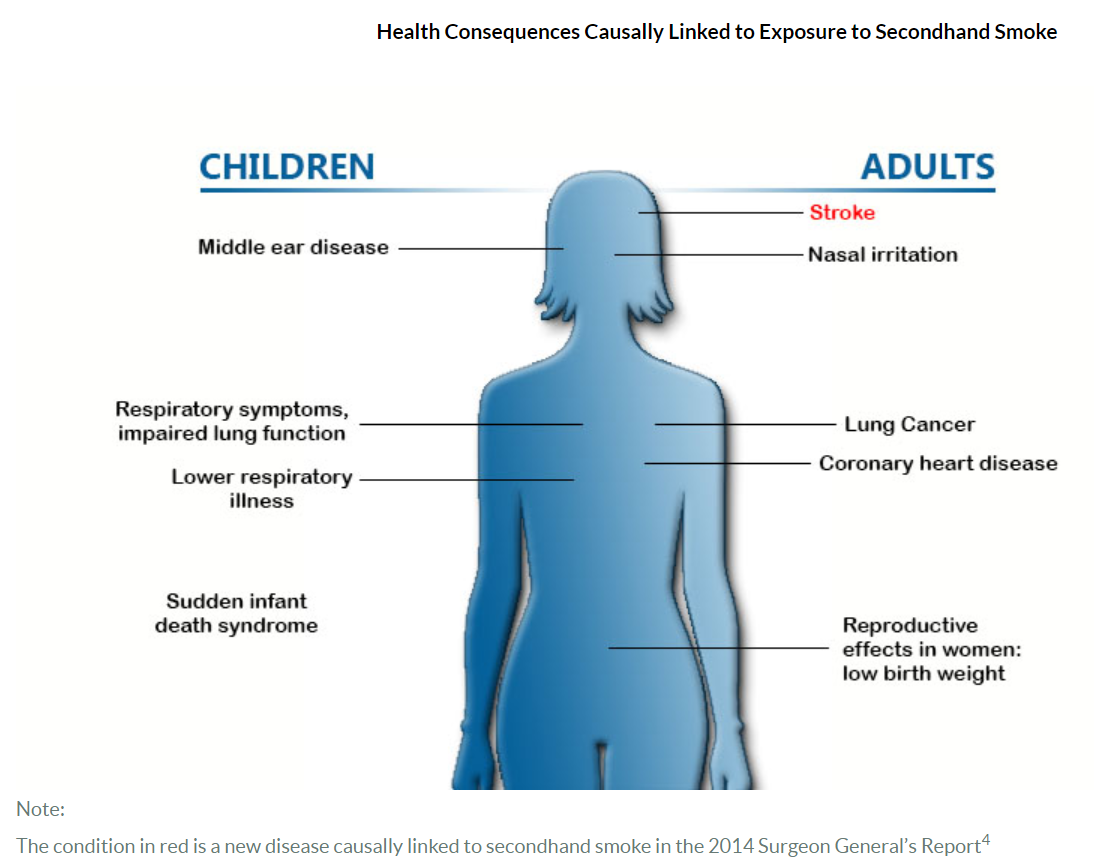 But, that’s not all. Mesler notes second-hand smoke can also increase the risk of Sudden Infant Death Syndrome (SIDS) for babies and has even been linked to certain cancers in ids like lymphoma, leukemia, liver cancer, and brain tumors.

“It can be life-threatening,” says Mesler.

Unborn babies are also in danger when around second-hand smoke. “It can cause low birth weight in babies, just as if the mother was smoking herself,” says Mesler. “Also, a baby’s lungs won’t develop the right way so, they could face life-long problems just from their mom breathing in second-hand smoke.”

She adds that second-hand smoke is even worse than smoking the cigarette yourself. “After the smoke is exhaled it’s in smaller particles,” explains Mesler. “So, they make their way into the lungs and body cells a lot more easily.”

E-cigarettes are no exception. Most e-cigarettes and other vaping devices still have nicotine in them. “You’re still blowing it out into the air and your child is still getting the smaller particles,” adds Mesler. Not to mention, if you purchase the liquid and cartridges online, say from overseas, there’s no telling what’s in the product. “If they have just a small amount of certain chemicals there are regulations that they don’t even have to put it on the packaging if it’s a small enough amount,” she says. “It could say ‘Nicotine free,’ but that doesn’t mean it is. It’s just a small enough amount so they don’t have to put it on there. It’s very scary for our poor kids.”

Also, Mesler notes there is “no risk-free level.” Just because you open the window in the car or smoke in another room, you’re putting children in danger. “Even if you’re in the same building, say apartments, and somebody is smoking, you can inhale the second-hand smoke just through the ventilation system. It travels very far.”

Mesler explains third-hand smoke is “the term used to describe the particle and gases that are left over after a cigarette has been distinguished. So, they can virtually land and remain on pretty much any surface.”

Toxins from smoking can remain on clothes, in a person’s hair, on their hands, on furniture and even flooring. “Carpeting for example, where people put their infants and children to play, it’s nearly impossible to get the toxins out,” adds Mesler. “A lot of times you have to completely remove the carpet.”

Third-hand smoke has additional health risks for kids as well. It can interfere with healing wounds; cause molecular changes in cells, which can lead to insulin resistance (a precursor for diabetes), increase the risk of developing cancer, cause fatty liver disease and more.

“If a child is raised in a home 18+ years with somebody who has smoked and they have the exposure to second and third-hand smoke, they definitely have risks of developing fatty liver disease and even heart disease,” adds Mesler.

Children who have never smoked a cigarette in their lives can even develop COPD or asthma later in life simply from being around third-hand smoke.

Can you Get Rid of Third-Hand Smoke?

“Most household cleaning products will not cut it,” says Mesler. “You can use vinegar on countertops, hard surfaces etc. That is one of the only things that will remove the toxins because it’s so acidic.” Again, she stresses that it’s best to just get rid of the carpet that could be holding on to the dangerous toxins.

According to the Centers for Disease Control and Prevention, parents can help protect their children from secondhand smoke by taking the following actions:9