Our 16-month-old son AJ is into literally everything these days.

Drawers, cabinets, the refrigerator. You name it, he finds it. The other day, he started pointing at the big green box under our coffee table. The box, buried beneath a bunch of board games we don’t have time to play anymore, contains the photo album from our wedding on June 10, 2006.

To be honest, I haven’t looked at it much over the years. It’s big and heavy…really heavy. I don’t think we’ve ever even had the coffee table book out on the coffee table.

AJ and I have spent a lot of time in that album in the last week or so. We look at the same pictures as he struggles to lift the thick pages, turning them and pointing to face after face.

“Uh?” he’ll ask, pointing at my gorgeous mom in her purple dress.
“That’s Nonnies,” I reply.
Satisfied, he’ll move to the next photo.
“Uh?” he repeats, his little finger resting on my father-in-law’s crisp tux.
“Gido,” I answer.

And so it goes, page after page.

The first few times I looked through it with him, all I saw was my bad eyeshadow and the poor Photoshopping. Thankfully, I’ve learned how to do my makeup correctly, and I know photo technology has definitely evolved.

But then I started really looking.

There’s my little brother, who left the following day for an 18-month deployement in Kosovo. At 19, he had to grow up fast. My Uncle Tom in the background of a church shot. He passed away from Alzheimer’s right before Christmas in 2013. My dad. So strong and able walking me down the aisle, but recent health issues have left him tired and winded. 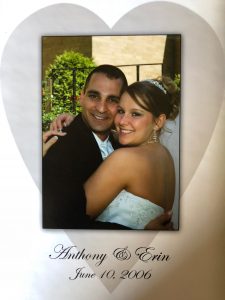 Then there’s Tony and I. So much younger, fewer wrinkles, so much more sparkle in our eyes. I was so much skinnier, and he had so much more hair. It’s undeniable how in love we were.

I wasn’t attracted to him when we met. At 21, I was barely holding on to an emotionally unstable relationship with a bad boy. After almost three years, he’d just given me the “we should take a break” talk. I went to work at Swenson’s a few days later and waited on two men in a Firebird convertible. The restaurant was giving away a Chevy Aveo, and I’d set a goal to have the most entries. I handed Firebird driver an entry form. As he handed it back to me, he quipped: “Now that you have my name and number, do you think I could have yours?”

“No,” I responded, not impressed that this older guy was hitting on me.
“Well if you change your mind, here’s my card,” he said, handing over his DJ business card.

Later that night, I was telling my friend about him.
“He’s 35,” I said, making a face.
Danielle saw opportunity.
“He’s 35?!” she asked. “He can buy us drinks! Call him!”
So I did. I didn’t get drinks, but we talked on the phone well into the early morning hours.

I didn’t fall in love right away. He grew on me. His heart, humor, selflessness. His laugh, the twinkle in his eye. The way he couldn’t get enough of me and held me tighter and stronger than I’d ever been held before. Like I was the only woman in the world.

When we got married, it was good. But we were so unbelievably naïve. We had no clue life would slap those dreamy grins off our faces and leave us scrambling for air so.many.times.

Not long after we were married, we faced a very public and bitter job dismissal and years of unemployment. After that, it just wouldn’t quit. Family struggles, a houseguest who tried to blow up our house (no, really), emotional detachment and probably some undiagnosed depression…we had it all. But we pushed through. We stayed focused on us and came out stronger. We finally got some good news in early 2015, when I found out I was pregnant with our first child.

I had never felt more confident, beautiful, secure and sure in my entire life. Our marriage was strong and we were so very happy. Those nine months were absolutely incredible. And then we got slapped again. As we rushed to the hospital on October 27, 2015, Tony already knew Ashlie’s heart had stopped beating. He felt it in his gut. I wanted to believe I was dreaming…until nurses put her unmoving body in my arms 24 hours later.

We navigated the tough waters of child loss, surviving what I now know ends many marriages. We clung to each other for strength and compassion. We were an inseparable team.

When I found out I was pregnant again, there was so much fear. We tried to trust but knew it could end in a millisecond. Slightly on edge but overjoyed, we welcomed AJ into the world in May 2017. 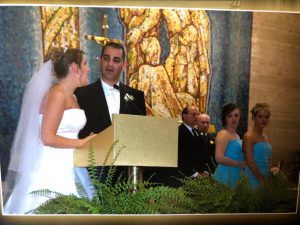 May I now state for the record: Nothing has tested us like raising our adorable, perfect son. Not the jobs, the unemployment, the houseguest, the loss of Ashlie. It was all tough stuff. And I wouldn’t want to do any of it again. But I never expected how hard we’d have to fight for each other every single hour now that AJ is here. How come no one told me marriage while parenting is NO JOKE? (!!!!!)

Add stretched-thin schedules, two bullheaded people and lack of sleep to food throwing, everyone else’s very vocal opinions, guilt and doubt that we’re doing anything right, and it’s a recipe for “What the hell is happening?!” It’s like all of our flaws that we ignored before are now magnified and ready to pounce.

I look with awe at the parents who have more than one child and wonder how they do it without killing each other. Maybe it’s just us because we’re so stubborn. I don’t know.

But what I do know is this: Even though words of affirmation are not your love language, I still do, Anthony Jerome. I choose you on the good days, the bad days and everything in between. I choose you when you schedule something else without telling me, when you let AJ watch TV while we eat and when your phone spends more time with you than I do. I choose you when I trip over your shoes and when you forget something else because you were rushing. I hope you still choose me when I say something catty, roll my eyes, make you late and get upset because you haven’t yet experienced the fun of taking a toddler on a day of errands by yourself. 🙂

After 14 years together, it’s easy to get annoyed. I’m learning that we won’t always agree about how to do it all. I’m also realizing that we have a lot to learn about this parenting thing…we’ll probably never catch up to what we should know. But this isn’t our first dance with a diversion. I want to be the kind of parents where their kid says, “Ew, gross,” when they kiss in the kitchen. So no matter what I mutter under my breath, no matter what we tell our friends about how crazy we’re making one another, there’s no one else I’d rather learn this with than you. I choose you, and I love you. Always.

1 thought on “I still choose you”