“You’re the only girl on your team,” my Lucia hears frequently. “Does it bother you?” I ask just as frequently. “I’m used to it,” she responds with her now, toothless grin.

While Lucia is used to it, many other young girls are not and the fear of being the only girl or being outnumbered by boys is so intimidating that it keeps our daughters from one of the most important activities in which they can participate in their lifetimes.

I have become increasingly concerned with the lack of female participation in local youth sports. Most coed youth team rosters are overwhelmingly male. Older, gender-specific youth teams struggle to find female participants, and local high schools are stretched to field girls’ Varsity teams, let alone JV and freshman levels. I wonder and worry about why so many girls aren’t playing sports and what the implications are for the countless number of young ladies who are missing out. 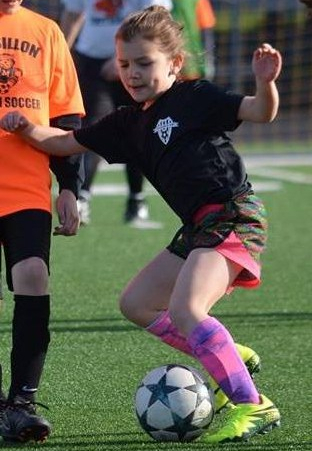 At our first soccer practice this season, Lizzie quickly scanned the field and most of the color immediately drained from her face. “I’m the only girl on the team,” she remarked to me timidly. I smiled and corrected, “No you’re not. I’m here.” The corners of Lizzie’s mouth turned slightly up and slowly broadened into a bright smile as we chatted about what it’s like to be the only girl.

Over the course of the season, she’s asked me about why boys are so rough, went back on the field after taking a ball to the face, learned how to use a discreet elbow to shield the ball and herself from aggressive male players, and always gives me a hug at the end of practice. One day, she reasoned that she should have to run less because she was a girl. I was standing with two team mothers who nodded in agreement when I told her with a wink, “Sorry Lizzie, girls always have to work twice as hard.”

Athletics are a colossal part of my life. I grew up running, shooting, dribbling and playing just about everything. My fondest childhood memories are of beating the neighbor boys in ‘HORSE,’ sprinting down 11th St SW in our neighborhood “track meets,” and speeding around the bases during a contentious game of kickball.

As I grew older, my involvement became more organized as I joined the basketball, soccer, track, and cross country teams, thriving in competition and teamwork while gaining confidence through physical activity. I was not always the most talented or skilled player on my team, but my coaches rewarded me for my hard work and I gained physical and mental strength and health that has stayed with me my entire life.

As soon as my son was old enough, I signed him up for soccer and was adamant that I was going to be his coach. When the club called, I was a bit taken aback, but not completely surprised when they asked for my husband, assuming he was the one who volunteered to coach. This wasn’t a malicious act, but instead a microcosm of the cultural assumptions we often make about gender and sports.

Coaches are men. Women are soccer moms who bring the snacks. Girls are cheerleaders and support the boys from the sidelines. Boys are judged by their strength and athletic skills. A girl’s value is determined by her attractiveness and willingness to smile pretty.

While these statements seem archaic when written so plainly, they are the underpinnings that often inform our decisions when it comes to our daughters. While parents may not intentionally sway their daughters’ actions and activities, our assumptions and gender biases often do just that. Encouraging our daughters to participate in sports can help us to tip the scales on gender inequality in ways that can have lasting implications for both boys and girls.

Aside from my love of basketball and soccer, my desire to coach came from wanting to complicate and expand my children’s understanding of gender roles. Dad can play a supporting role and Mom can be the authority figure. Over the years, much to my pleasure, I’ve found that coaching has achieved so much more than my initial intentions.

One of my fears was that as the kids got older, the boys I coached wouldn’t listen or respect me as Coach. I was concerned that parents wouldn’t want a female coach or that I would experience push back and patronization from male coaches. I braced myself for the sexism and gender discrimination that would come from ingrained cultural assumptions about girls and women that I had fought against for most of my life.

Initially, some parents and other coaches looked at me like I had three heads, and not so successfully hid their skepticism. Opposing coaches have walked past me to shake my assistant coach or husband’s hand before games. Every so often, I infuriate other teams’ parents and coaches by yelling a bit too loudly (for a woman) or making them experience the frustration of getting beat by a girl.

While, of course, sexism is alive and well in the world of athletics, the vast majority of my experiences have been positive. Parents, dads and moms alike, are supportive and respectful of my coaching style and approach. My fellow coaches treat me as an equal and a colleague, not as a “female coach” who is an anomaly, but as an integral part of the organization.

The kids on my teams, for the most part, don’t know any different. Coach Nicole is their coach and the fact that I’m a “girl” does not phase them. I’ve found that I need a whistle more often and that lowering my voice a few octaves helps to get their attention, but aside from a few outliers, most children do not display blatant disrespect because of my gender. Their reactions, in large part, is reflective of the words and actions of the adults in their lives, who are overwhelmingly supportive.

The most important and unexpected result of my coaching has been the reaction of little girls on my teams. So many young girls are just like Lizzie, apprehensive about playing and uncertain of whether they belong in the world of sports. “Is this something that girls are supposed to do? Can I compete with boys? Will I be praised for my strength, speed, and agility as much as my hair, outfits, or beauty?” I see these questions in far too many young girls’ eyes and they linger there because of unspoken and unintentional messages we give them every day with our remarks, priorities, and assumptions. When they realize that I will be their coach, a girl just like them, they get the message that they belong and have an ally.

To watch my Lucy play soccer with confidence, strength, and skill, no one would ever imagine that she refused to play in all but the final game of her first season. Lucia is not fearless, as many would believe. She is full of insecurities that playing sports has helped her to confront. She was terrified to play soccer at first, fought back tears and confusion in her first basketball game, and walked up to the plate with her lip quivering and knees shaking in her baseball game last week. Lucia is not fearless, but she is incredibly brave. Playing sports has required her to confront her fears and insecurities head on and then conquer them one by one.

My daughter is determined and focused because of sports. After her first soccer game (which was the last of the season), she looked at me and said, “Mom, I’m going to score a goal in my next game.” I laughed because her next game wasn’t going to be for several months, but that little girl walked onto the field in her first Spring game, scored several goals, and has improved every day since. By the end of her first basketball season, she had scored a basket and gotten so many steals that my dad calls her “the thief.” Despite her trembling lips and knees, Lucy put the bat on the ball and got herself a double in that baseball game.

I love that Lucia is an athlete for so much more than her ability and accomplishments. I love that she cares more about making a good pass than what her hair looks like when she’s doing it. I love that she is complimented on stealing a ball or a base and not always on her pretty smile.  I love that she is supportive of her teammates and plays an integral role on the field instead of just cheering from the sidelines. It’s not just Lucy that benefits from playing sports; it’s all of the Lizzies, Haleys, Rileys, Madisons, and Violets who are brave enough to try. Athletics can help these girls find strength and confidence. They can add nuance to their understanding of where they belong and what they can do. Athletics can elevate and accentuate what it means to be a girl, so let’s encourage our daughters to go ahead and play like a girl.

1 thought on “Let Her Run, Throw, Kick, Shoot, and Hit Like a Girl”