I will never forget when the ultrasound tech spoke the fateful words: It’s a girl. As the wand moved over my abdomen, my heart pumped out of my chest. I was not at all surprised, but I burst into tears just the same.

All I could think was, “What the hell am I going to do?” My mother and I engaged in some epic battles as I was growing up and in the most heated of them, she would say, “I hope you have a daughter who is just like you.” The rebellious teen that I was would retort, “I do too, and she will be awesome.” At that moment, I would have given anything to take back my ill-fated words.

To say that my mother and I have a complex relationship would be both an understatement and an inaccuracy. She is and always has been the most central figure in my life. She has been a source of strength and frustration, a role model and a warning, my loudest cheerleader and fiercest critic. 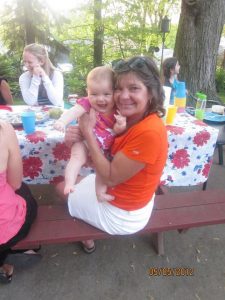 My mother inspires, exasperates, amuses, worries, and annoys me all at once. I am a perpetual scholar, but it has been my mother’s colloquial wisdom that has rung most true all of my life.

While my feelings toward her are nuanced and often contradictory, the way my mother feels about me is powerfully simple: She loves, she supports, she forgives, and she is ALWAYS there when I need her. My mother’s love for me is unwavering and one of the true constants in my life.

Never before was this more clear to me than last January. I had been fighting the darkness of depression and had been doubting my entire worldview after the 2016 election. My belief that people were inherently good was shaken, and my trust in so many close to me was shattered.

I felt helpless and fearful of this horrible world where racism, xenophobia, sexism, greed, and lies seemed to be winning. Nothing, it seemed, could break through the fog of disillusionment and dread. I had lost my joy.

I didn’t know what else to do, so I decided to march.

A few days before I left for the Women’s March in Washington, D.C., my mom called me to check in. She asked what my plans were for the weekend and I told her. She sucked in her breath and I waited for her to caution me, to chastise me, to tell me not to make waves, or to accept reality. Instead, she said, “Oh Nikki, I am so proud of you.”

At a time in my life when I felt so alone, so devoid of hope, my mother found the perfect words. Not only did she support me, she fervently defended me against ugly comments from my relatives and bragged to everyone about her daughter’s conviction.

She called to check in on me and wanted to hear all about the intense, soul-restoring experience I had. As we shared this unforgettable moment, I couldn’t help but remember all of the other times she was exactly who I needed:

When the carnival worker reduced me to tears before a ride and she taught me to transform those fears into resolute anger. When she spent what must have been a fortune for her on my plum and mustard balloon pants with matching top from Merry-Go-Round so I would fit in with my peers. When she bought me a 1982, 4-speed Mustang for $500 and told me I could only have it if I learned how to drive stick-shift, check the oil, and change the tires.

When she cried when I was a little too rough on the basketball court and got into a fight at the powderpuff game. When she took off work to beam with pride at every awards ceremony, despite losing much-needed income. When she drove to Bowling Green, drank tequila shots with me, and then forced me to walk at graduation, despite a massive hangover.

When she listened to me rage or complain, backed off when I chose to shut her out, and forgave when I was unfair and mean. All those little moments have built a foundation that has allowed me to grow, prosper, learn, and improve as a human being. I was able to assert my independence with the confidence that, despite all of life’s variables and every mistake I was bound to make, my mother has and always will be my constant.

So, what the hell am I going to do with my daughter? Part of my anxiety over bringing a little girl into this world was the anticipation of having a child who took me on the tumultuous ride I put my mother on. Another piece was the certainty that I would make some of the same mistakes my mother did or worse, add to those mistakes by overcorrecting. The largest, most overwhelming cause of my anxiety, though, is the knowledge of what it means to be female in what is still overwhelmingly a male-dominated world.

Every woman knows the dangers and pitfalls of living in a patriarchal society. We’ve been warned never to walk alone at night, trained how to use our keys as weapons against unknown male attackers, and also warned against drinking too much or dressing too suggestively for our possible known attackers. We’ve had our asses grabbed, our bodies objectified, and our competence questioned.

We have been subjected to microaggressions directed at our male peers and by extension us, “You throw like a girl. Don’t cry like a girl. Quit whining like a little girl. Dolls are for sissies.” We have been told our limitations through marketing and classroom practices.

We have had our strength and resolution tested, our compassion mistaken for weakness, and our value measured by our appearance. Every woman fights to claim her worth and be her truth Every. Single. Day. Now I have to teach my daughter how to fight her own life-long battle, navigating the treacherous terrain ahead of her.

To prepare myself, I scoured over countless feminist texts and parenting articles. Many of them were helpful and insightful, but Cinderella Ate My Daughter was especially enlightening for me. After reading Peggy Orenstein’s book, I realized I had been missing the most important part of raising a strong, independent daughter. This was a lesson my mother had taught me by example: Let her live her own truth, define her own identity, and make her own mistakes.

I cannot make my daughter into who I want her to be, but I can love and support her as she takes the journey. In this world full of perils, joys, obstacles, challenges, opportunities, and triumphs, I can be her constant.

I named my daughter Lucia Patricia, my noble light, after her great-grandmother, Lucia and my mother, her grandmother, Patricia. I wanted her to have a strong name that represented the strong women who came before her, a tribute to her history.

In the present, I am doing my best to be a flawed, but persistent role model for my daughter and surrounding her with fearless, kind, fierce, and impressive women, just as my mother did for me.

I am also doing my very best, with quite a few missteps already, to let her forge her own path and write her own definition of her female identity.

My little girl who wears sneakers with sparkly skirts, is ferocious on the soccer field and lovingly cuddles her dolls, has the most infectious giggle and can deal out witty sarcastic barbs in seconds flat, is on her way to doing just that. If the past 6 years and the fact that she is her mother’s daughter is any indication, she is going to take me on a different, but still tumultuous expedition.

As I raise Lucy, I’m becoming more confident in my ability to endure the journey with her and even excited at the prospect of what is to come. As I watch her grow, I’m overwhelmed by amazement, joy, amusement, and anticipation. I was right all those years ago. My daughter is awesome and I am so proud.

In many ways, my mother and I are polar opposites. On the surface, I’ve grown into a very different woman than she is. Despite these apparent differences, though, the past year has shown me that we haven’t grown apart but instead solidified our most important bond.

My mother is strong, independent, kind, compassionate, and loyal. She is thoughtful and empathetic, curious and witty. Those are all qualities I hope to embody and pass on to my daughter.

My mother’s most impressive quality by far, though, is her capacity for love. I was only the first of four daughters to challenge her. We all are taking very different journeys and have turned my mother’s life upside down, inside out, and then back again. Still, she persists. Still, she forgives. Still, she loves. Still, she remains our constant.

Today my mother turns 60 and there is no better time to pay tribute to her tenacity. It is because of our bumpy ride that I feel prepared to move forward with my own challenges and to be there for Lucia as she faces life’s many obstacles. Each day I am grateful for the foundation my mother built and I will strive to do the same for my Lucy. Today, and every other day, I am so very proud to be my mother’s daughter.

6 thoughts on “My Mother’s Daughter: A Multi-Generational Love Letter”