In New Philadelphia, the Big Brothers Big Sisters organization has a new leader in a familiar face. 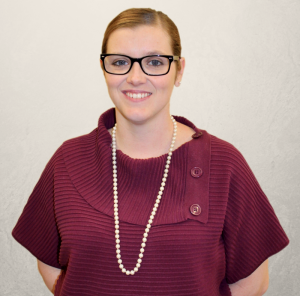 A long-time employee of the organization, Beverly Pearch was recently named as the new CEO and leader of Big Brothers Big Sisters of East Central Ohio.

She graduated from Kent State University with a Bachelor of the Arts in both Psychology and Justice Studies in December 2009. In August 2009, a few months prior to her graduation, Pearch began her career with Big Brothers Big Sisters as a part-time site-based specialist where she worked with local school districts and supervised the school-based mentoring programs. After graduation, she was offered a full-time position and became the Event Coordinator.

It wasn’t long, however; before Pearch was called back to the programming side of the organization. “I realized I really kind of missed working with the families,” explained Pearch. Roughly a year ago she became the Program Manager.

“Essentially, I’ve kind of held every position with the office, which gives me a unique perspective,” she said. “I have a good understanding of how decisions at the top affect the people at the bottom. I think it’s a really good fit.”

Pearch attributed her decision to continue to grow with the organization to her passion for the BBBS mission to serve kids. “Absolutely the kids and seeing the impact it has,” she explained. “Coming in as a staff member and getting to know these families and getting to know these kids and seeing how it has impacted their lives has just been the most rewarding part of this organization and seeing that side of it has made me stay where I’m at.”

When asked about the impact the organization has on local kids she indicated there were many stories in which she has seen first hand a child’s self-confidence improve, academics improve, and even attitudes completely change.

Pearch noted, however; the littles aren’t the only ones that benefit from the program, “because of the way it changes the outlook in the big’s life too. It makes them want to be a better person and step up as a leader because they know that they have that person looking up to them. It’s a perspective-changer for anyone that gets involved in a match,” she said.

In her new role, Pearch explained she has a goal to serve even more. Big Brothers Big Sisters is in the middle of a three-year strategic plan. In the first year, 2017, they set out with a goal to serve 345 children and they introduced 347 to their Bigs. This year they hope to reach 410 kids and plan to launch several new programs and events as a way to do it. New community partners include the YMCA and the Salvation Army Tuscarawas County locations.

“We are very fortunate to have others in the area that welcome partnership, so we can have an even greater impact,” added Pearch. “The community is essential to this program working. The need in our community is very great.”

The BBBS Chapter in Tuscarawas County currently has a waiting list that includes 29 local kids waiting to meet their big. Pearch noted the commitment isn’t as great as many assume. The organization asks only four hours of each volunteer each month and it’s based off their schedule. The time can be served throughout the month or on a single day.

“The kids are our tomorrow. They’re our future and if we don’t invest in our kids, what does our tomorrow look like,” she explained.

The organization continues to invite volunteers to become a mentor to local kids in multiple ways including their social media campaign, Waiting Little Wednesday. The series features the profile of a little from the waiting list every week in hopes a Big feels inspired to step up and make a true difference.