In the fall of 2008, at the fresh age of eighteen, I found out I was pregnant. My boyfriend, filled with the worry of “How will we support a baby?” enlisted in the military. It was something he discussed often when we were in high school, that both his family and I were quick to try to talk him out of. It wasn’t exactly the safest time to be enlisting. So we went off to college together, but then there it was, our little fetus on an ultrasound. And like that, he had found his way out of something that probably wasn’t for him anyway, and he was sworn into the Marine Corps before you know it.

I know he enlisted hoping to solve a problem while seizing the opportunity to carve out the life he wanted for himself. But it created a problem for me, as I found myself taking on the role of a stay-at-home-mom and wife. Looking back, I didn’t get a chance to weigh my position with much thoughtful consideration. I was eighteen and pregnant, and there was a constant presence of opinions being offered by of other people who were more than happy to point out why I should marry him, travel to whatever place the government decided to send us, and just “stay home with the baby”.

When you’re still so young and new to adulthood, you take so much life advice into consideration from the adults that surround you, because you’re not really sure of anything. Just a tip for any younger readers who may have stumbled onto this article? Don’t do that. Make your mistakes, and screw up on your own terms. If they end up being right, oh well, at least you went for it. Then flip ‘em the bird and say “whatever” when they start with the I-told-you-so.

I guess that’s easier said than done because I didn’t do that. I was reminded that I hadn’t finished college yet so any job I could get probably wouldn’t pay well enough to make a dent in our living situation, especially after the cost of childcare. My husband’s position in the military was a demanding one that more than paid our bills but had him out of town (and out of the country) so often, and I was constantly told that our children deserved at least one parent around to provide some sort of stability. Fine, I’ll be a stay-at-home-mom for a while, and eventually, I’ll go back to school and finish my degree and get to work on my career… right?

And wouldn’t you know, I was a miserable housewife. It wasn’t long before I began asking my husband “So, um, when do you think I could go back to school?” Or “Maybe I should get a part-time job… just to make some extra cash and give me some time out of the house.” But I was constantly met with “She needs you at home right now.” Or “What would be the point in that? You’d barely make enough to cover daycare expenses, babe.” There was always some reason, and the more reasons I was met with the more bitter and jealous I became towards him.

When I tried the “I need to be socializing with other adults,” approach, the responses I were given were along the lines of “Maybe you should reach out to the other wives or join a mom group. That could be fun.” And bond over what? Pinterest recipes, baby gear, and discuss when our husbands are all deploying next? Truthfully, I didn’t have anything in common with those women except that I had a baby and my husband was in the military. But those connections were based on people that I loved, not the mutual enjoyment of our individual interests, and that’s just not enough basis for real friendship. I find that true even now (almost nine years later) when I realize that my closest friends are all childless and only one of them is married.

But I went anyways, and I found myself among women who loved being stay-at-home mothers and military wives so much that I felt even more depressed. I thought maybe there was something wrong with me. Was I horrible that I wished my husband hadn’t enlisted? Every other one of these women had “USMC WIFE” on the bumper stickers of their car, or plastered on the ass of their yoga pants, while I looked at his military affiliation as a cross to bear, and was counting the days left until the end of his active duty service, with a hope and a prayer that our rocky relationship would make it. I just kept thinking, if we moved back home and could be among family and friends, he could get a “normal job” with his military experience on his resume, and maybe, just maybe, we could have the life I saw for us. 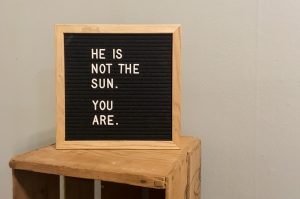 For five years, and another baby, I tried to live that lie hoping we would eventually see my truth… and then he re-enlisted, and my opinions weren’t given much consideration that time either. A few months passed, and after I became overwhelmed with the thought of grinning and bearing it, I filed the papers on our fifth anniversary. You might be feeling bad for me after reading that, but please don’t. That is not the tragic ending that even I thought it would be at the time. Instead, that was the most wonderful and best decision I ever made for me, although an admittedly selfish one. But sometimes, ya know what, you have to be self-centered; Carpe Diem and all that.

You see, it’s been four years now. I’m living in Ohio again. I’m nearly finished with a degree in Graphic Design + Photography, and I’ve got my sights set on a second degree in Business. I’m remarried to a nurturing, hilarious, wonderful man who works night shifts so that he can be home more during the day… because he enjoys caring for the children and doing housework, and understands that gender roles are societal bullshit. He knows that it’s perfectly okay for a man to love those things and for a woman to prefer working, and would never dream of asking me to conform to a role that I wouldn’t happily choose. These days, I own my own business, and I’m the primary household breadwinner. Oh, and we have another baby. I don’t have post-partum depression like I did with the first two, and I’m much happier with my role as a mother and wife than I was previously. Isn’t life weird?

I tell you this story because I want to share with other moms that I know what it’s like to venture into motherhood, marriage, or even into adulthood, with all these expectations (or the weight of other people’s expectations) and visions for what you want out of your life. You may be sure that you know exactly where you picture yourself in 5 years, 10 years, etc. You might think you know what you want, get it, and then decide it is absolutely not for you. Or you may try very hard to be a part of someone else’s happily-ever-after, hoping you can adapt, or somehow change the ending and make it yours, but you’ll learn very quickly that isn’t how it works at all.

I have learned that you have to write your own story. Your children, your partner… they are all important characters, and it is important you are seeing to it that they are cared for. But you cannot allow yourself to become the supporting role in the narrative that is your life. To quote the great Christina Yang: “Don’t let what he wants eclipse what you need. He’s very dreamy, but he is not the sun. You are.”

It’s a new year, and there are blank pages to be filled. I’ll be contributing to filling some of the empty space on the internet via Newsymom, once a month from here on out. So until next month, I challenge you to examine if being a mom is an important part of your life or the very definition of it. Are you happy with the answer you find? Are you taking time for things like self-care, to celebrate your talents, to spend time with your friends, or work on your personal goals? If not, and you could use a bit more M and E in the midst of motherhood, then be sure to check back with me next month. I hope to provide some thoughts this year about parenting and balance, while I head into what is about to be my busiest year of entrepreneurship yet, and take on the new challenges that present themselves with a three-month-old baby girl on my hip.