“This may be the most important film as a parent you will ever watch. I hope and pray we honored our son’s legacy and help others through our pain,” Brad Hunstable.

The mission began with tragedy

The world lost Hayden Hunstable to suicide in the middle of the mandated COVID-19 stay-at-home orders on April 17th, 2020 just 4 days before his 13th birthday. His family explained that Hayden did not struggle with depression nor did he have a history of mental health problems. He was a normal healthy and happy kid who was unprepared for social isolation. His parents attribute Hayden’s emotional suffering to a “perfect storm of routine disruption, social isolation, increased gaming, and a pressure stack of activity cancellations.”

Hayden’s dad, Brad Hunstable, posted a heartbreaking video two days after burying his son and spoke of an “emotional bubble” that he believed was about to burst in America. His video hit home with parents all over the world, immediately going viral, and amassed more than 110 million views with countless comments. ​ 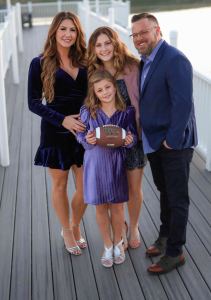 Over the last few months, the Hunstables have poured themselves and their hearts into making this short documentary film called “Almost Thirteen.” The mission of the film is to raise awareness of pre-teen and teen suicide. “I must admit, it has been difficult beyond description,” explained Brad. “Grieving while making a movie has been challenging and scary, but we believe it’s critical to saving others during this time of national anxiety.”
Data shows that suicide is on a terrifying incline this year due to the effects COVID-19 has had on society through areas such as isolation, job loss, financial stress, the sudden death of loved ones, fear of COVID and struggles with anxiety and depression. While final statistics have not been calculated, some reports suggest suicide may be the number one killer of youth in 2020.
Brad and his family are on a mission to share Hayden’s story to help save lives. “Our goal is to educate parents on how to have the right conversation with their child before they even say the word ‘suicide’ to you,” Brad explained. “We believe having a conversation directly with your child or teen saves lives. Teaching them to speak up if they hear others feel this way keeps kids here.” 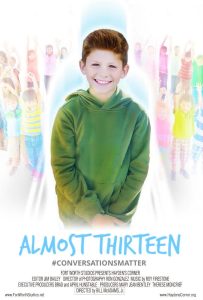 Spring of 2021. However, due to 100s of thousands of texts and emails from families stating they either lost a child to suicide or have children who have attempted to take their own lives, they felt a sense of urgency to produce this 16-minute short documentary film to start connecting to people as soon as possible.

“I don’t want anyone to feel this pain or see what I saw,” Brad said. “Hayden’s death didn’t have to happen. As a parent, I [have] learned so much of why, how, how to prevent, and the signs [and] I am driving to help others.

The work is just beginning

The global release of the short documentary film, ‘Almost Thirteen’ is far from the end goal. This is just the beginning of a journey ignited by pain and tragedy and fueled by dedication and a passion to keep kids alive. Brad has set his sights on Congress. “I’m working to brief Congress on my idea for sweeping national policy change to save the next generation,” he said. “We [have] focused on core curriculum as an educational policy. We stuff math, science, etc. in our kids’ brains. But, we forgot to teach them the most important skill in life…how to live. How to be resilient, how to think positively, how to breathe during anxious times, how to react to a break-up, how to overcome a bully, how to thrive. What’s more important than setting up this generation for happy and fulfilling lives?” The journey to share Hayden’s story continues through several efforts organized by the Hunstables and the organization they created in memory of their son, Hayden’s Corner. 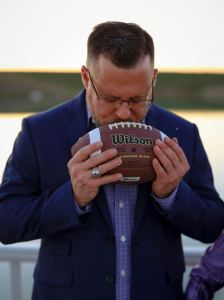 While Brad and his family have set on a path to dedicate their lives to bringing effective and impactful awareness to youth suicide and how to prevent it, they are also discovering and learning how to cope after an unimaginable loss. “We are healing. Everyone heals at different speeds and grief definitely has stages. I have been shocked, sad, angry, had immense guilt, and every other imaginable emotion,” Brad said. “But, we are all in wonderful Christian counseling – we laugh, we cry, we walk, we pray…”

“…Slowly the dagger in our hearts when we think of Hayden is becoming thoughts of joy. His smile in my mind warms my heart.”