Five Ohio public employees and Ohio taxpayers for Lower Drug Prices are urging top pension officials in the state to join the revolt against Mylan Inc. 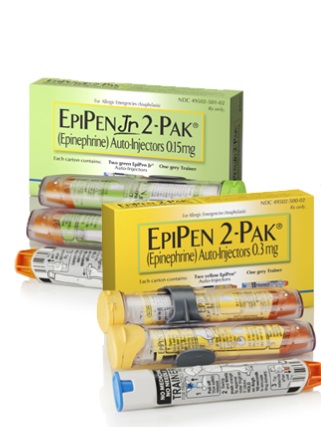 Mylan Inc. has been immersed in controversy and has even become synonymous with “price gouging,” according to some reports when it comes to the company’s EpiPen.

The EpiPen is an anti-allergy device produced and sold by Mylan Inc. It is often used to protect children with dangerous allergies.

Over the last year, an uprising has ignited following the company’s decision to hike the price of the EpiPen to more than $600 per dose.

The move caused a very public uproar among parents nationwide and even prompted congressional hearings in Washington D.C.

Heather Bresch, the CEO of Mylan Inc., has been heavily criticized for the move.

Reports also indicate the U.S. Department of Justice is accusing the company of overcharging state Medicaid programs by as much as $1.2 billion.

Meanwhile, according to a press release issued by Ohio Taxpayers for Lower Drug Prices, the company’s stock has plummeted by 36 percent during months of heavy negative publicity.

Also, according to that press release, a group of advocates have written a letter to the Board of Trustees of the Ohio Public Employees Retirement System, (OPERS), as a major Mylan shareholder, to vote its shares to oust Mylan’s current Board of Directors.

OPERS owns $11 million in Mylan stock – or about 300,000 shares. “The Mylan board has made a series of terrible management decisions and Mylan’s stock price has suffered as a result,” said Theresa Kauble, one of the five employees. “It’s time to kick the current Mylan board out of office, and Ohio’s own OPERS trustees can help make that happen.”

“Mylan needs to be punished for business practices that have ripped off Ohio consumers and taxpayers,” added Ohio Taxpayers spokesman Dennis Willard. “The question now is whether the trustees of $90 billion of Ohio pension money are ready to stand up to drug companies like Mylan and stop their reckless greed.”

Officials note Ohio Taxpayers is sponsoring the upcoming November ballot issue to lower the prices that Ohio state government agencies pay for drugs so that they are in line with what the U.S. Department of Veterans Administration pays for the same drugs

They argue that by lowering drug prices, the ballot measure – the Ohio Drug Price Relief Act – would save Ohio taxpayers $400 million a year.

Newsymom.com has reached out to supports in an effort to remain balanced.

In the past two weeks, public employee pension boards in California and New York – as holders of millions of shares of Mylan stock – have announced that at Mylan’s annual shareholder meeting this Thursday they will vote against the Coury pay deal and seek the ouster of at least three Mylan board members who are up for reelection. Two investor advisory firms are also urging their clients to join this revolt.

“OPERS should join with other pension boards that are calling for a shakeup of Mylan’s board,” said Kauble.

OPERS will be meeting this coming Tuesday and Wednesday in Columbus, and its 11 member Board of Trustees could conceivably take an emergency action in support of the investor revolt at that time.

You can find a link to the full letter by clicking here.

Mylan Inc. has made generic EpiPens available at a reduced cost.

(Photo of EpiPen and generic EpiPen images featured in this article were published on they Mylan Inc. website).