What happens when iron stops sharpening iron… I mean what is the opposite thing?

Dullness, rust, in effect, apathy. Then heaviness. What is the essence of sharpening? The act and work of it, what does it mean? Why iron? These are just a few of the things rolling around in my head after yet another difficult conversation this year.

I was stuck there. So after my kids were in bed and my nightly routine was finished, somewhere around midnight, I got out my pen and let the ideas and notions flow as quickly as they were coming.

First, why iron; what does iron do? When sharp, it cuts, feeds, protects…does. But when not sharp, it’s just heavy. Something to lug around, like an anchor which, unless on a boat in deep water is useless. Is that what happens to faith when it is no longer challenged by a different interpretation? It becomes…useless? Like a dull, rusty, ineffective blade-turned-weight.

Where incredibly rich text, which is millennia ahead of its time in science and psychology, philosophy, and love, gets boiled down to a lame set of ideas. Which are then fashioned into rules which ultimately make us… dull. When someone understands differently or challenges those rules (or worse) blatantly ignores the rules: just write them off. Exclude. Avoid. Discard. That is not relationship, it’s certainly not love. That’s not what our Savior paid for. Lazy, ineffectual, even disposable faith is worthless. It’s worse than worthless, it’s disobedient.

So why sharpening or, what is the essence of sharpening? Of blacksmithing and forging? The heat of the forge, the hammering, the work; not easy nor comfortable. This allegorical depiction of labor is that of expending ourselves for the good of others. The ultimate good of us. Think of it: when forging and blacksmithing happened it was a facet of community and required for survival. If the work of sharpening stopped, surely the community died.

The iron had to be forged. 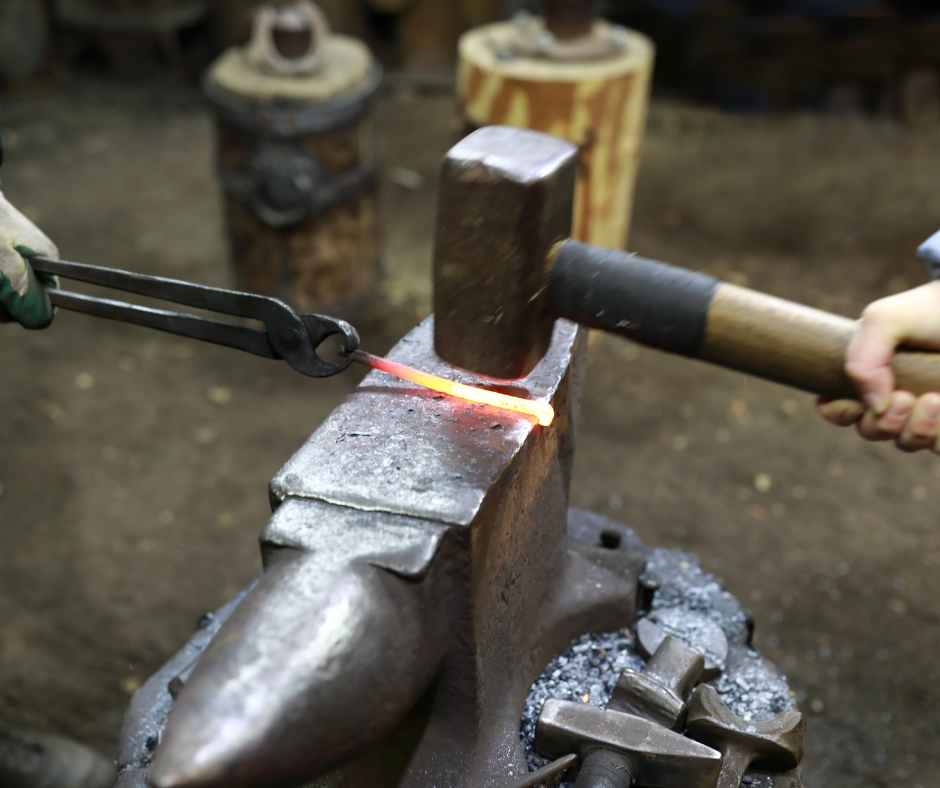 Formed into blades for the turning up of soil and the cutting of textiles and food. Repeatedly heated and cooled; hammered and grinded.

The process is pure labor.

Those who engaged in the task would grow stronger as they worked.

Tolerance for the heat of the forge would increase. The skills of sharpening would multiply. Understanding for the process would become greater.

We should think about our faith in this same way. What happens to opinions and ideas sitting untouched in our lives? Left unchecked, surely they eat away at the Truth just like rust corrodes iron. When we refuse to sit in the place where the heat of contention blazes like firey forge, uncomfortable and unchallenged, weakness creeps in. Understanding dwindles, endurance diminishes and faith is reduced to religion…to rules. Community dies.

As I stare into the future, on the cusp of a brand new year: find me in the middle, at the forge.

Covered in the grime of my opinion and bits of the things I used to think.

The rust that gets ground off when I hear how another thinks.

Fanning the flames and keeping an eye on the horizon for someone interested in the sharpening.