Your child may actually like the food they spit out…

Experts with Trinity Hospital Twin City are sharing valuable information on how parents can avoid or deal with a picky eater. According to Angela Simmerman, a Certified Nurse Practitioner in the Pediatrics Office, just because a kid makes a funny face when eating something, doesn’t mean that they don’t like the food.

To be absolutely certain a child doesn’t like a specific food, Simmerman suggested parents continue to reintroduce the same food and texture 10, 20, even 30 times to truly determine if the child likes it or not. “At that age, textures are a challenge for them,” she said. “If it’s something that’s a different texture, just reintroducing it into their diet so that they can get used to all the different textures, so they can really determine what they do and what they don’t like.” 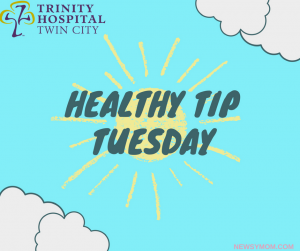 Around the toddler years is when Simmerman explained many children turn into picky eaters and she indicated so long as parents take the time and have patience, children can be set up to like a wide variety of foods and be healthier adults.

If your child is already passed the toddler stage, Simmerman said not to work, it isn’t too late. “Just ask them to do you a favor and try something they think that they don’t like,” she said. “Just ask them to take a bite and if they don’t like it that’s fine but have them promise to at least try it.” She indicated that the foods you like and dislike often change as you get older. Just because you didn’t like something five years ago, doesn’t mean you won’t like it today.

As far as what your child should drink, Simmerman said it’s simple. A child should drink plenty of milk and water and have no more than 8oz of fruit juice a day and that’s it. She said do your best to completely avoid sugary drinks like soda, sweet tea, and punch.

“Being healthy, it does seem like it takes a lot of time and effort because they make junk food so easy and so accessible and healthy foods are generally a little bit more pricey than junk food, but it’s possible,” added Simmerman.

Another suggestion from Simmerman is to consider making the food fun! Make bananas into caterpillars with blueberry eyes and celery legs or make the peanut butter wheat bread have a strawberry smile! Pinterest is a great resource for easy, quick and fun ways to present food to young kids so they’re more apt to eat healthy and enjoy it!

Finding the Time and Money

So, where do you fit in preparing healthy foods and where do you find the extra money to spend on quality produce? Simmerman said it all comes down to planning and taking advantage of the good deals.

“This is farmer’s market season,” she said. “Also, this time of year people are trying to get rid of extra fruits and vegetables from their gardens because they have too much.” And, don’t be afraid of buying too much. You can freeze it! “So this winter you’ll have fresh green beans,” or other produce.

She noted to avoid buying canned vegetables or fruits as they tend to have a higher amount of sodium. Additionally, frozen fruits and vegetables taste more like fresh options so, kids are more likely to like it.

Simmerman suggested taking a couple hours on Sunday afternoons to clean and cut your produce so it is ready to go for the week ahead. “Rather than grabbing a bag of potato chips then, they can grab a bowl of strawberries,” she said.

So, why put in the effort? “My belief is that you shouldn’t need to give a multivitamin,” explained Simmerman. “You should be getting it from your food. That’s where your nutrition should be coming from.”

And parents are encouraged to use this as an opportunity to make the healthy changes maybe you’ve known you should be making. “Just by knowing that your children are going to want to do and eat the things you eat so, you need to be a good role and make the changes for them.”

For more information on how much of what sources of nutrition your child needs, visit www.healthyplate.gov.

1 thought on “Secrets to Avoiding a Picky Eater”