(Stone Creek, Ohio) – Creativity and kindness are pulsing through communities, keeping them alive as we all learn to interact, stay connected, entertain, and celebrate in new ways amid the COVID-19 pandemic.

And that creative spark made its way into the Deetz home as a family came together to make one little boy’s 6th birthday as bright and memorable as possible. Holden Deetz turned 6-years-old on May 6th. “We’ve been so creative over the years with his birthday themes, but this one was going to be testing our capabilities,” his mother, Mallory explained. “We planned for two separate get-togethers with each side of our family [and] he got two cakes out of the deal, but that’s was simply to sugarcoat the idea that there wouldn’t be any of his friends in attendance.”

Mallory admitted she had a fear of not being able to make Holden’s golden birthday as special as past celebrations. “This pandemic birthday planning was a bit discouraging. I was worried I wasn’t going to be able to pull off anything special for his ‘golden birthday’ while everything was shut down.”

But, a grand surprise was in the works and the Deetz family had no idea. “When we heard the sirens coming down into our valley, horns beeping, music blaring, bass bumping…Holden knew something was worth going to see,” said Mallory. “He took off running so fast that he lost his shoe!” And when Holden made it out to his yard, he saw a line of cars full of his family and friends passing by to celebrate his birthday with a surprise parade complete with police sirens. “He greeted everyone with only one shoe on the entire time. He was in complete shock and awe.” 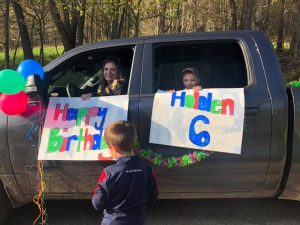 The parade included classmates Holden hadn’t seen in months, a teacher that misses him, family, and friends. “He couldn’t believe it was all for him,” said Mallory. “There were times when I had to bend down and whisper to him that this was not a dream, that this many people came just for him. His smile was contagious, it could not have gotten any bigger. It was a memory that he will never forget.”

And just another example of how much people are thinking of others during this time, Mallory noted they had no idea the parade was even planned. “It was a complete surprise,” she said. Mallory’s cousin Erin Crilow, her son Liam is one of Holden’s best friends, arranged the entire gathering through Facebook with help from Holden’s Kindergarten teacher at Ragersville Elementary, Mrs. Jenkins. Tate Andrews, another parent of one of Holden’s good friends, even arranged for Sheriff David Gerber to lead the pack. “It was his day off, but he came out to make this extra special for Holden,” added Mallory. 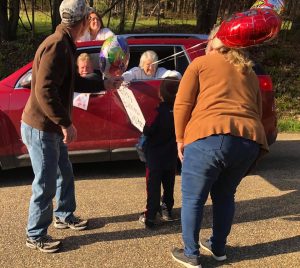 Mallory admitted that this birthday, while super special, was different. “He wasn’t able to get hugs and kisses from his Great Aunt, and Great Grandmas this year,” she said. “It’s the little things that get overlooked while a party is taking place that we missed. Just being physically close to friends and family and letting kids be kids in the country.”

But, even before the surprise, Holden seemed to be happy with what his family was able to do for him. “Holden was sitting with myself, his Aunt Grace, and his Papa Rick on his bed. His Papa asked him what his favorite birthday present was this year. He quickly responded with his new gocart that his dad had bought him,” Mallory explained. “He then paused and said to us, ‘actually…my best birthday present is just being with you guys and having you guys with me.”

Mallory noted that as a parent, that was all she needed. “It wasn’t about going all out and giving him the most memorable birthday in the middle of a pandemic,” she said. “It was being able to gift him with a family that loves him and that he loves more than a brand new and super fast gocart.”

She explained that in turn, the change can be seen as a blessing. “A present reflection that only God could bless us with,” she said. “I’m a proud mom and I know my husband is one proud dad. It has affected our hearts and our way of thinking immensely, for the good.” 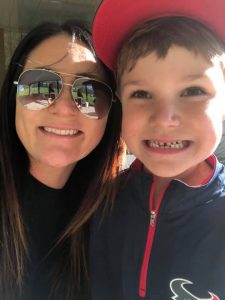 She encouraged everyone to remember that just one small gesture and act of support can make a world of a difference. “God gave us a chance to hit ‘reset.’ We are living in a world where the little things DO matter again.” She noted that her small community is full of big hearts, ones that will forever be etched into their hearts. “When I was worried I couldn’t give my son a birthday to remember due to the pandemic, his family and friends pulled through. It’s all about giving back and giving yourself the chance to make a memory along the way.”

And so, Mallory wants Holden’s quarantine birthday to be a message to us all that you can get the biggest and best present, but it’s not about the money that’s spent. It’s about the love that you are able to share with others around you. “This pandemic has been scary for some, but I find it a blessing in disguise,” she said. “It truly has brought out the best in people. I’m happy to be living amongst these times, it’s changed me. I know it’s changed, Holden. Just by one ‘drive-by’ reminder of what life is really about.”